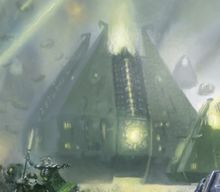 Obelisks are guardian-class war machines, similar in design to a Monolith but different in purpose. They are seeded throughout Tomb World cities and upon activation serve as air defense platforms.[3]

Able to remain dormant beneath Tomb Worlds for millions of years, these craft can remain virtually undetected as they can be maintained on the smallest trickle of power. Once awakened by either automatically sensing enemy aircraft or intentionally by their Necron creators, the Obelisk rises from the earth and levels out far above the surface, blasting enemy aircraft out of the sky with its Tesla Spheres Should an enemy aircraft stray too close, the Obelisk will then trigger a grav-pulse, an expanding sphere of force that shorts out their systems. Once the skies are clear, the Obelisk will descend and act as a mobile artillery piece able to engage targets, utilizing a Gravitic Pulse against enemy ground forces.[3]

The Living Metal walls of the obelisk are lined with Canoptek Leeches, allowing it to self-repair in battle.[2]