I am damned: it is a truth that I cannot escape. It is the greatest pain I have ever born, but it is also the truest sacrifce I have ever made in the service of the Emperor and the Imperium. -- from the confession of Inquisitor Lord Godella Morn, 745.M40[2c] 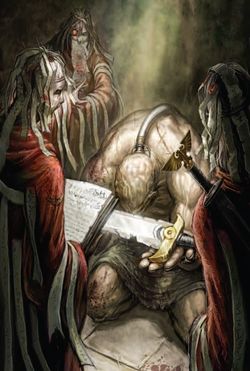 Oblationists are a minor Radical faction of the Inquisition. They believe that the Warp, the xenos and the unclean are utterly damning and those who utilise them must face the ultimate sanction. Yet they also believe their use is necessary to overcome mankind's enemies. Therefore the righteous must sacrifice themselves and embrace damnation in order for humanity to survive.[1] They hold an intolerance of all other Radical factions in a similar to the most Puritanical factions, believing that only they may wield the weapons and knowledge of the enemy.[2c]

The Oblationists were founded in the Calixis Sector in late M40 by Inquisitor Lord Godella Morn, a known Monodominant. When dennounced for practicing sorcery and making pacts with dark forces before a Conclave of Inquisitor Lords, she confessed that she had used the tools of Chaos, xenos, and heretics, but professed her continued belief in Monodomination. She said she was an "Oblationist", not a Xanthite, and had damned herself in order to act “in truth rather than in wishful dreaming.” She was executed by immersion in molten brass. A small number of Puritans of the Conclave considered her arguments, however, and concluded that she was right, thus starting the Oblationist faction.[2b]

Early Oblationists suffered heavily, either being consumed by the powers that they tried to harness, or falling upon each other with accusations of corruption. One lone, unknown, Inquisitor saw that the creed could only survive through two factors: secrecy and the Oath of Oblation. Over two centuries all rival Oblationists were destroyed, leaving the single nameless Oblationist. This Oblationist taught others, binding them by the Oath of Oblation and ensuring the creed's survival.[2c] 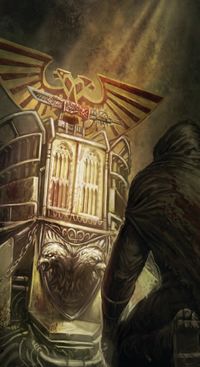 The creed is passed down from master to the apprentice, who is bound him with the Oath of Oblation. In turn, these apprentices become masters and bind their own apprentices through the Oath. Oblationist Inquisitors use a variety of rituals for aspirants, often infused with macabre imagery invoking death and damnation. As a final test, many present a challenge that must be overcome through use of a daemon weapon, or actual daemonic possession that the aspirant must overcome. The ceremonies end with the Oath of Oblation: "to suffer no other who is not “of the Oath of Oblation” and has truck with the unholy or profane, and to destroy the unclean without mercy by any means and method." Oblationists consider undertaking the Oath to be an act of self-annihilation, and many take new names to signify the death of their old self and the passing of their rebirth into willing damnation.[2c]

Oblationist Acolytes are of two types: non-Oathed and Oathed. Non-Oathed Acolyte groups have a similar composition to those of any other Puritan Inquisitor, and do not know their master's true belief system. Oathed Acolytes are those who have taken the Oath of Oblation and operate in Oathed Cadres, consisting of those who deploy heretical means in service of the Emperor.[2c] 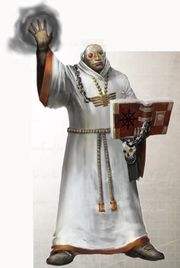 Priests who sacrifice themselves to damnation are seen as the pinnacle of the Oblationist creed, and as such their Acolyte sorcerers are created from the most pure priests of the Adeptus Ministorum.[2c]

Sin Eaters are the Oblationist's warrior executors, sworn to destroy any who fall into damnation without mercy or exception. Many carry heretical weapons themselves, trusted by their master to stay true. When created, prospective Sin Eaters confess every sin of thought, word, or deed they have ever committed each of which is scarred into their skin by knife, brand, or tattoos of ink mixed with heretic's blood. The Sin Eater is the anointed with crematorium ash and declared damned and capable of no further or greater sin, and is further tattooed by both divine and blasphemous symbols.[2b]

Some Oblationists dedicate themselves to the pursuit of forbidden technologies and make use of likeminded, often outcast, Tech-Priests.[3]