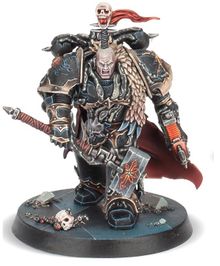 Obsidius Mallex is a Chaos Lord who commands the Servants of the Abyss Warband.

Mallex has commanded the Servants of the Abyss on several campaigns, most notably fighting under Abaddon in naval battles over Cadia in the 13th Black Crusade. As Cadia was destroyed by a Blackstone Fortress, Mallex watched aboard his Hades Class Heavy Cruiser Impaler. The explosion threw him into the Warp, where it emerged deep in Segmentum Pacificus inside a new Blackstone Fortress. Impaler melded with the Fortress, stranding Mallex and his warband. Since then Mallex has raged in the darkness, taking out his fury at those he manages to take captive. At the same time Mallex hopes to one day master the technologies of the Fortress in order to wield the immense power it commands.[2]