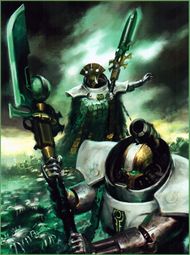 Vargard Obyron is a powerful Necron warrior of the Sautekh Dynasty who serves as the personal bodyguard to Overlord Zahndrekh.[1]

Unlike his master, he is well aware of the realities of his existence and is fully lucid but has long since abandoned attempts to awaken Zahndrekh to reality. He attends to all the loose ends of his master's eccentricities and is extremely loyal, willing to give his life for Zahndrekh. Zahndrekh would have died long ago had it not been for Obyron, who has personally put down rebellions by members of Gidrim's court attempting to take advantage of the Nemesor's mental state as well as dispatching dangerous prisoners Zahndrekh has deemed honorable.[3] In combat, the duo have proven to be almost undefeatable.[1a]

Obyron's combat prowess was such that in 831.M41 he defeated both White Scars Captain Kor'sarro Khan, Eldar Ranger Illic Nightspear, and many escaped prisoners in simultaneous combat.[1b]

While Obyron is the well-known bodyguard for Zahndrekh, he is a ferocious military commander in his own right. He also possesses the ability to cut through dimensions and reappear across the battlefield, taking with him any of the units that he commands. It is a great way to ensure Vargard Obyron's incredible skills are employed against the most worthy enemy.[2] 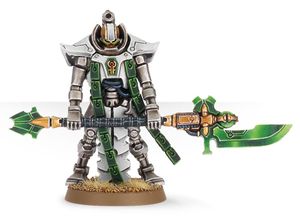