"For those that defy the Imperium, only the Emperor can judge your crimes.
Only in death can you receive the Emperor's judgement."
- Motto of the Officio Assassinorum[18]

Symbol of the Officio Assassinorum[16]

The Officio Assassinorum (Office of Assassins) is a subdivision of the Administratum responsible for the recruitment, training, and deployment of elite assassins.[1] 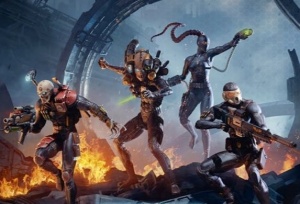 The four principle types of Assassins of the Officio Assassinorum from left to right: Eversor, Culexus, Callidus, and Vindicare[15a]

The Officio's head is the Grand Master of Assassins and due to the power of his organisation, and by tradition, he is always a member of the Senatorum Imperialis. Although the Grand Master oversees the organisation, they may only deploy assassins with the authority of the Senatorum, requiring a two-thirds majority of the High Lords to authorise the deployment of a single assassin.[16]

The agency is almost as secretive as the Inquisition itself and it is not surprising to see that the two organisations work closely with one another.[4] The location of the Officio's headquarters on Terra is secret, and the Master of Assassins is never seen by the Adeptus Terra, though he is rumoured to have access to the Emperor himself. Typically, the Grand Master's loyalty to the Emperor must be beyond doubt, as he holds power that could feasibly topple the Imperium itself.[2]

Under Imperial and Mechanicus law, the improper activation of a member of the Officio Assassinorum is considered treason of the highest order.[8]

Assassins are recruited at a very young age, from the orphans of Imperial servants raised in the Schola Progenium[1], and from the populations of feral worlds. Prospective candidates are tested mercilessly even as they are shipped to Terra, pitted against hazardous environments as well as each other, with perhaps one in ten surviving the journey.[11b] The survivors are divided among the temples and then undergo ten years of intensive training under the Lord Assassins.[11b] From then onwards they live and operate from one of the Assassin temples said to be located somewhere on Terra. They are harshly tested and trained, their senses and resolve heightened with implants. Even after the initial training, the life of an agent of the Officio remains hard and unforgiving.[2]

Some Inquisitors are known to organise Officio Assassinorum training for Death Cultists that serve in their retinue which transforms these already highly efficient killers into much more deadly and honed executioners.[4]

The primary division of the Officio is into temples (also called clades), each of which is led by a small group of Masters (often termed Lord Assassins or Grand Masters[9]) and specialises in a unique brand of murder.[16] These Masters rarely work directly but instead being responsible for planning, organising, research and watching over the younger Assassins. The greater number of the Assassins are unranked, though some can be more experienced than others.[2]

The temples, with the exception of the Culexus Temple, are located on Terra but their specific locations are a closely guarded secret. They may be deployed to a battlefield to covertly 'help' an Imperial force, including Space Marines, Sisters of Battle, and the Imperial Guard, but never join any squad, as they work best alone. The Officio as a whole is based on the Assassinorum Temple on Terra. The temples use many exotic types of equipment, such as synskin, a substance that once sprayed onto the body, forms a black outer skin which protects the wearer from the environment and enhances strength.[2] The Temple also maintains a secret vault of forbidden and alien weapons, giving them access to some of the most advanced technology in the Imperium.[5a]

The ranks of the Officio Assassinorum also include ancillary staff, along with Astropaths, Navigators, and other such servants. Though these individuals are not Assassins themselves, they live entirely within the organisation and have no contact with the outside world.[2] 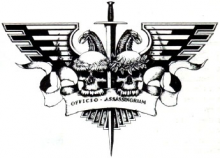 Seal of the Officio Assassinorum[25]

An additional temple, the Maerorus Temple, attempted to create an assassin using illegal human/mutant/xenos hybrids capable of absorbing the biomass of victims to rapidly evolve new bio-weapons. The temple is now extinct.[9]

Each Temple is organized as a Segmentum Level, which in turn are divided into Sector Commands.[27]

The origins of the Officio Assassinorum are traced to the times of the Great Crusade where a pact was made on Mount Vengeance by the six Directors Primus of the Assassin Clades, headed by the Master of Assassins. All seven individuals were masked and their identities kept secret from one another and thus they were unaware that their leader was none other than Malcador the Sigilite. From the six Directors Primus, the founding Clades were formed from Sire Vindicare, Sire Eversor, Sire Culexus, Sire Vanus, Siress Venenum and Siress Callidus who all met in secret at the Shrouds. For decades, they hunted the enemies of the Emperor by way of stealth and subterfuge in order to show these foes that there was no place for them to hide. Such was the secrecy of this agency that its existence and actions were only marginally known to the Emperor as they intended to maintain his noble purity. As the deployment of an Imperial Assassin was a delicate matter, usually only a single agent was sent into the field or, at maximum, three, but always from the same primary Clade.[3] During its earliest days the Officio Assassinorum fell under the purview of the Ephoroi order of the Custodian Guard.[23]

Following the outbreak of the Horus Heresy, the agents of the Officio Assassinorum dispatched eight agents from the six primary Clades in order to eliminate the renegade Warmaster Horus, but all of them failed. The last attempt was made by Tobeld of the Venenum Clade outside the command tent of the rogue Primarch. During a meeting at the Shrouds, the Clade Directors Primus debated and argued over how to eliminate their foe. At this point the Master of Assassins, following the advice of Legio Custodes Captain-General Constantin Valdor, decided to assemble the first Officio Assassinorum Execution Force consisting of various Clades, to eliminate Horus. Such an act was unheard of in the history of the Officio Assassinorum.[3]

In 546.M32, the High Lords of Terra were slain to a man by the Grand Master of the Officio, Drakan Vangorich. A Space Marine strike force drawing from the Halo Brethren, Sable Swords, and Imperial Fists Chapters was scrambled to stop Vangorich. Storming the Assassinorum Temple on Terra, the force was assailed by a hundred Eversor Assassins. One sole Space Marine survived to reach Vangorich and slay the mad Grand Master. Afterwards, the Imperium descended into a period of anarchy.[6]

During the Age of Apostasy, the Officio itself became afflicted by the general corruption of the Imperium, and certain high-ranking members of the Office utilised the assassins for Goge Vandire's own ends. During Vandire's purges, powerful individuals and even the Officio's Grand Master became victims of the assassins. The war within the Officio became known as the Wars of Vindication. Following the Apostasy, it was deemed wise to reorganise the Office, one change being that only the Senate could order an assassination. A section of the Inquisition, the Ordo Sicarius, was created to monitor and control the Officio Assassinorum from that date on.[17]

It was through intelligence gathered by the Officio Assassinorum that the Adeptus Astartes learnt that the Sorceror Ygethmor intended to claim the world of Medusa V in a Warp Storm.[7b] During the 13th Black Crusade, an assassin team was deployed to eliminate the Sorceror amongst other notable targets. It was known that at least seven agents of the Assassinorum failed in the attempt on Ygethmor's life.[7a] 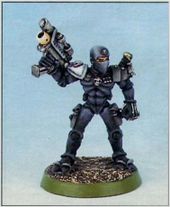 Owing to their codes of conduct and their proud warrior nature, Space Marines find assassination distasteful, and will avoid any contact with assassins under most circumstances. However, as is to be expected from an institution which specialises in subterfuge and clandestine actions, there have been countless rumours and conspiracy theories concerning the Officio Assassinorum, and a number of these relate to disasters which have befallen certain Space Marine Chapters. A long string of coincidences have led some to lay the blame for the loss of the Fire Hawks' fleet in the warp, the unusual destruction of the Crimson Fists' fortress monastery by one of their own defensive missiles, the death of the Celestial Lions Apothecaries on Armageddon[11b], and the ambush of the Angels of Retribution on Alantor X, as well as many other lesser known catastrophes squarely at the Assassins' door. It may never be known if Assassins were involved in any of these calamities, and if they were, whether they were working under the orders of the High Lords of Terra, some other institution or for their own agenda.[5b]

What is known, however, though it is hardly common knowledge, is that, since the Horus Heresy, some secret departments of the Inquisition have researched methods of controlling and/or killing Space Marines, and some Assassins have access to their work.[10]