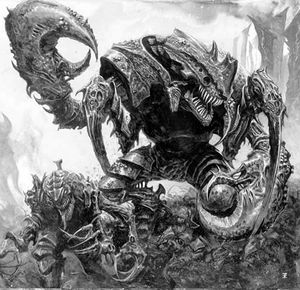 Old One Eye is a unique Tyranid Carnifex with the ability to regenerate itself from mortal wounds. Its body bears the scars of many blows that should have killed it, and rumours persist of Old One Eye being killed more than a dozen times. It is armed with a pair of huge, crab-like claws capable of ripping even the hardest foe to pieces.[1]

Old One Eye spearheaded Hive Fleet Behemoth's assault on Calth, swatting away Leman Russ Battle Tanks as if they were insects. Its rampage was stopped when a forgotten hero of the Imperium fired a Plasma Pistol through its eye and into its brain. This shot was the first time Old One Eye was brought down, and it is still unable to regenerate its eye and is permanently scarred with a plasma burn running across its skull. Decades later after Behemoth had been driven from Calth, a band of smugglers stumbled across its body frozen intact in the ice-packs of Calth. They thawed it out hoping to get a bounty for the corpse, but Old One Eye's grievous wounds instantly began to heal. It soon awoke and slaughtered the smugglers. Isolated from the Hive Mind a Carnifex reverts to its instinct to mindlessly kill, and so Old One Eye's release heralded a series of Tyranid raids on Calth. Land convoys were destroyed, hab-domes smashed and entire populations massacred. Lesser Tyranid creatures such as Termagants and Genestealers, also left behind from Behemoth's invasion, were drawn to Old One Eye's presence as a dominant leader. The people of Calth cried out for aid, and they were answered by Scout Sergeant Telion of the Ultramarines. Telion tracked down Old One Eye, but found it difficult to pierce its armoured flanks. As Telion's warriors were cut to pieces by the beast, Telion made a one-in-a-million shot that hit its ruined eye-socket. Old One Eye was overcome with pain and stumbled into a cavernous ravine. Telion led a search for the body, but Old One Eye was never found.[1]

The eventual fate of Old One Eye is unknown, but there have been several reports of Carnifexes matching its description causing havok across Ultramar and beyond. If all the legends are true, then Old One Eye has been killed more than a dozen times.[1]

Old One Eye's ability to heal damage inflicted on it during combat has given rise to theories of it being an unstable mutation, an experiment in rapid cell regrowth, abandoned by the Hive Mind. But with the arrival of the Hive Fleet Leviathan this mutation has become nearly a standard on every Carnifex.[Needs Citation]

The most recent sighting of a creature resembling the Beast of Calth was upon the world of Tartoros, during Hive Fleet Leviathan's assault on the Cryptus System. Ignoring the fire from Cadian heavy weapon teams that spattered off its scarred carapace, this alpha Carnifex smashed apart several of the void shield generators that kept Tartoros protected from devastating solar storms. Not a single Imperial soldier survived the resulting cataclysm. If this is the same creature, it is unknown how it escaped the confines of Calth, but the fact remains that, wherever Old One Eye is sighted, carnage and slaughter follow in its wake.[2]