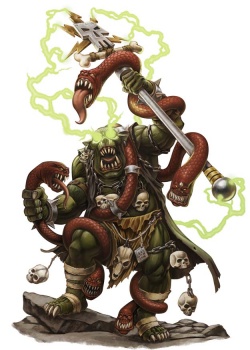 Old Zogwort is the greatest of all Ork Weirdboys. He lost one eye in an especially devastating blast which destroyed an entire Imperial Guard Company, although he claims Mork guided him into doing so. He is associated with snakes, and has the ability to turn enemies into squigs.[1]

Old Zogwort was born on Zurk under the ominous phenomena of a total eclipse, where his spore had matured within a nest of bloodvipers. As soon as he was born he was attacked and bitten, until, in order to survive, he began to bite back. From that point on, no snake would bite him. Within a single year he had rose to prominence in his Feral Ork tribe. His true powers revealed themselves when he reached adolescence and violent psychic phenomena began to surround him. In a short time Zogwort's fame soon overtook that of his own Warboss Skabgutz so he left the planet, taking several of his squig-snake pets with him, forming the Weirdwaaagh!.[3]