I got old. I saw plenty.
You're not that old.
Not compared to some, I suppose.[1d] 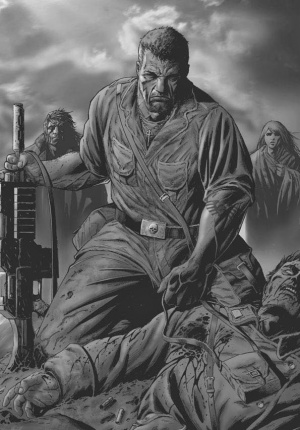 Ollanius Persson is a Perpetual and mysterious figure in history related to the myth of Ollanius Pius.[3]

Ollanius Persson was born as one of the mysterious Perpetuals, and has lived so many lives that he has forgotten his true age. However he estimates that as of the Horus Heresy he was roughly 45,000 years old "give or take", which would place his birth around 15,000 B.C.[3] in the city of Nineveh.[2] If this is to be believed, it would make him even older than the Emperor, who according to older sources was born around 8,000 B.C..[5] He is said to be the oldest Perpetual.[4]

In Terra's ancient past, Ollanius acted as the Warmaster of the Emperor's armies. During a war in East Phoenicia against a Chaos Cult said to be the proto-Cognitae, the Emperor and Ollanius' armies besieged a massive tower etched in Enuncia that was being erected. After emerging victorious, Ollanius sought to destroy the tower and all the dark knowledge it contained. However the Emperor refused, instead wishing to preserve the knowledge for use against future threats. Disenchanted with the Emperor, Ollanius stabbed him with a dagger before using Enuncia to destroy the tower and escape.[6a]

Having lived through all of recorded human history, he makes first-hand reference to historical and mythological events such as being one of the Argonauts, participating in the Battle of Austerlitz (during the Napoleonic Wars), the Siege of Verdun (during the First World War), and the Battle of 73 Easting (during the Gulf War), amongst others.[2]

By the 31st Millennium Ollanius Persson had become known as 'Pious' Oll Persson because of his devout belief in the Catheric religion and was a civilian farmer of Calth in the Ultramar system. Before this, he had been a private soldier in the Imperial Army who earned the right to retire; being gifted with service-shares for a plot of land proportionate to his years served (rounded down - the Army always rounded down), he decided to cash them in on Calth, taking on twenty hectares. He chose Calth for two main reasons; the first was that if service-shares were used to buy land on a world newly-opened for colonisation, travel-fares to that world were paid for. The second was that, out in the farther reaches of the Imperium, under the banner of the "New Empire" being forged by Roboute Guilliman and his Ultramarines, Persson felt that it would be easier to practice his faith without incident; religious faith was widely looked down upon in the Imperium as unscientific nonsense. Persson settled down on Calth, living comfortably enough for eighteen years. The only indicators of his past as a soldier were the fading tattoo on his arm, the battered lasrifle mounted on his wall, and the company of an ex-Army loader servitor named Graft, that could not be dissuaded from referring to Oll as 'Trooper Persson'. To others, including his neighbours and several employees, he was just old 'Pious Oll'.[1a]

Oll was present on Calth when the Word Bearers Space Marine Legion attacked the Ultramarines during the Great Betrayal. The initial strikes from impacting orbital debris (once ship yards and vessels of the Ultramarine fleet) reminded him, terrifyingly, of his last campaign in the Army, upon the world of Chrysophar. Oll turned to his faith to help him survive during this time, and was knocked unconscious shortly after uttering a prayer to his god. During this unconscious period, Oll appeared to dream of being visited by an old friend of his; John Grammaticus. Unwilling to converse with Grammaticus, Oll attempted to carry on preparing breakfast for his wife; Grammaticus was forced to remind him that his wife died long before he joined the Army. Long before the last time he joined the Army, to be exact. Oll also refused to listen to John's attempts to remind him of their old brotherhood-in-arms in such conflicts as those that took place at Anatol Hive and the Panpacific on Terra, "several lifetimes ago". Finally, Grammaticus used Oll's status as one of the few remaining Perpetuals in existence and the onus that came with it to somewhat reluctantly guilt him into paying attention.

I'm only what I am now thanks to xenos intervention. You, you're a true Perpetual. You're still like him.[1b]

Grammaticus delivered the news that without their intervention, "he" was going to lose the war, and that if "he" lost, the human race would lose. Grammaticus urged his old friend to leave Calth via "Immaterium sidestep" and gain an object for him. When Persson asked where he was supposed to go, Grammaticus replied that he would show him:[1b]

Persson then found himself transported from his comfortable dream-environment to one of horror; aboard a space vessel at war, but a vessel that was unnatural and disturbing, orbiting a burning Terra. Entering a massive chamber, he encountered a dead angel lying upon the floor, his brutal killer standing nearby. Taken aback by the unholy appearance of the angel's murderer, he raised his Catheric symbol and audibly renounced the Evil One that stood before him. The killer took a step towards Oll, but stopped, his attention caught by something held in Persson's hand. At that moment, a golden light coming from behind Oll flooded the chamber, a light Oll recognised as one he used to know... but weaker, and sullied. Announcing that he had seen enough, he heard Grammaticus speak as if bringing him to wakefulness.[1b]

Waking up in what was left of his lands, Persson resolved to escape from the ongoing Battle of Calth, aiding a number of other survivors on the way, many of whom banded together with him and accompanied him off-world. Before leaving, he managed to acquire an athame ritual blade from a Chaos Cultist that he believed may be the item he was supposed to fetch, to be used for something utterly important. Persson and his survivors consisting of Graft, Dogent Krank, Bale Rane, Hebet Zybes, and Katt left Calth by use of apparent sorcerous techniques; he used the athame to open what appeared to be a form of warp-gate and stepped through.[1c]

For the next six years Persson and his small band wandered through both space and time using the Athame and a warp-sensitive compass, attempting to reach Terra at the behest of Grammaticus. They were hunted by a variety of foes: the Word Bearers, Alpha Legion, Daemons, and assassins of the Cabal bent on seeing Horus victorious. On the world of Andrioch they emerged shortly after the end of the revolt of the Iron Men and became stranded for two years. There, Persson speculated on what to do next but was confronted by John Grammaticus who urged him to go back. However Persson saw through the deception and killed Grammaticus with his Athame, revealing that his friend was a shape-shifting impostor of the Alpha Legion. With few options left, Persson led his band through a cosmic void left behind by the Iron Men that he would have preferred to avoid.[3]

After a seeming eternity of travels throughout space and time, Ollanius and his group finally emerged on Terra. However they found themselves in the Hatay-Antakya Hive region, now occupied by the Emperor's Children and transformed into a horrific dream garden known as "paradise". Within paradise, desperate civilians seeking escape from the horrors of the Siege of Terra were entrapped within in vines and had their dreams harvested by the Emperor's Children, who consumed them.[6b] Oll and his group were only saved from Paradise and the Emperor's Children by John Grammaticus and Leetu. During the struggle to escape paradise, Bale Rane was slain by Slaaneshi Daemons, and the group was nearly again overcome before being saved by Actae and a Space Marine identifying himself as Alpharius. Despite the pleas of John, Ollanius agreed to have the duo aid them in their quest.[6c] Together, the group acquired an Arvus Lighter and flew to the Imperial Palace across Terra's ravaged landscape.[7a] However as they crossed the frontline, they were shot down and crashed into the Inner Palace. Oll and others were guided by "Alpharius" into hidden passages with the intent to reach the Sanctum Imperialis.[7b]

Ollanius Persson is said to belong to the wold "Catheric" faith and wears what appears to be a crucifix around his neck. This is obviously inspired by the real life Catholic religion M31.