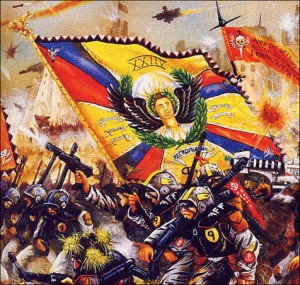 Ollanius Pius is essentially a mythological figure of the Imperial Creed, whose tale and identity varies according to the source.

Ollanius Pius is a legendary figure, said to be a Guardsman who sacrificed his life to save the Emperor during the Siege of the Imperial Palace. He is considered a Saint within the Imperial Guard and his image is often displayed on regimental banners.[1]

The Order of Ollanius Pius is the highest military honour awarded in the Imperial Guard:

...Lucian lifted the winged medal of the Order of Ollanius Pius. Bearing the golden face of an angelic youth, laurel leaves arrayed across his noble brow, the medal represented the very highest honour a mortal man could earn in the service of the Imperium.[2] 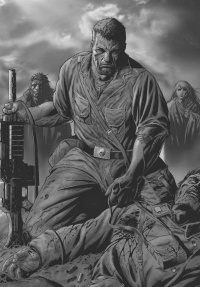 Ollanius Pius was born as one of the mysterious Perpetuals, and has lived so many lives that he has forgotten his true age. However he estimates that as of the Horus Heresy he was roughly 45,000 years old "give or take", which would place his birth around 15,000 B.C.[5] in the city of Nineveh.[4] If this is to be believed, it would make him even older than the Emperor, who according to older sources was born around 8,000 B.C..[6] Having lived through all of recorded human history, he makes first-hand reference to historical and mythological events such as the being one of the Argonauts, participating in the Battle of Austerlitz (during the Napoleonic Wars), the Siege of Verdun (during the First World War), and the Battle of 73 Easting (during the Gulf War), amongst others.[4]

By the 31st Millennium Ollanius Persson had become known as 'Pious' Oll Persson because of his devout belief in the Catheric religion and was a civilian farmer of Calth in the Ultramar system. Before this, he had been a private soldier in the Imperial Army who earned the right to retire; being gifted with service-shares for a plot of land proportionate to his years served (rounded down - the Army always rounded down), he decided to cash them in on Calth, taking on twenty hectares. He chose Calth for two main reasons; the first was that if service-shares were used to buy land on a world newly-opened for colonisation, travel-fares to that world were paid for. The second was that, out in the farther reaches of the Imperium, under the banner of the "New Empire" being forged by Roboute Guilliman and his Ultramarines, Persson felt that it would be easier to practice his faith without incident; religious faith was widely looked down upon in the Imperium as unscientific nonsense. Persson settled down on Calth, living comfortably enough for eighteen years. The only indicators of his past as a soldier were the fading tattoo on his arm, the battered lasrifle mounted on his wall, and the company of an ex-Army loader servitor named Graft, that could not be dissuaded from referring to Oll as 'Trooper Persson'. To others, including his neighbours and several employees, he was just old 'Pious Oll'.[3a]

During the Horus Heresy he became wound up in the battle against Horus following the Battle of Calth and worked with John Grammaticus to reach Terra.[5] 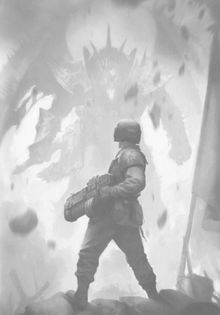 Ollanius Piers was an Imperial Army trooper of the Hundred and Fifth Tercio Upland Grenadiers Regiment during the Siege of Terra. During the battle for the Eternity Wall Spaceport, he was interviewed by Historian Hari Harr. Piers recounted his battle for the Pons Solar bridge where he stood before a World Eater until Jenetia Krole arrived to dispatch the traitor. Thinking the story lacked enough significance, Harr changed the World Eater to Warmaster Horus himself.[7] Later as the Eternity Wall Spaceport fell, Piers stood his ground against Angron and was slain.[7a]

Ollanius Pius is a mythic figure to the common people of the Imperium, and in some ways to the Warhammer 40,000 community at large; he is often referred to as the man whose selfless actions aboard the Warmaster's battle barge ultimately led to Horus's defeat, without great evidence to back this up, by both the fictional group and the real one. The reasoning for this in-universe is that his story is presented as a legend of a long-ago Saint. Out of universe, it involves previous tellings of the Heresy story (published before the current novel series) that have variously presented a Legiones Astartes Terminator (and then, in a retcon) a member of the Emperor's Custodian Guard as stepping in between the humbled Emperor and the triumphant Horus, only to be horrifically slain. It is this death that then spurs the Emperor onto finally defeating Horus once and for all. It is commonly interpreted by the fandom that Pius' believed sacrifice actually took place aboard the Warmaster's Battle Barge, and that he was another iteration of the Terminator/Custodian character. This interpretation appears to be supported by the latest published material, which places a character called Ollanius Persson into this confrontation, albeit if only in a vision and in a somewhat different manner.