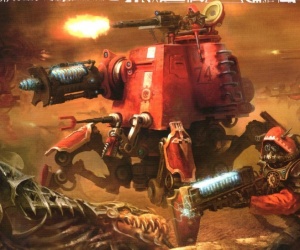 The Onager Dunecrawler is a walker used by Adeptus Mechanicus Skitarii.

Based on technology from the Dark Age of Technology, the Onager Dunecrawler is based on the Mars Universal Land Engine (or M.U.L.E.); itself inspired by the bad-tempered beasts of burden that transported their masters across Holy Terra in ancient times.[1] The M.U.L.E. was fashioned by famed techno-archaeologist Arkhan Land as a transport but was soon modified into a weapon of war. It was renamed, equipped with force shielding and replicated by the millions. The Dunecrawler of M41 is largely similar and is able to even outclass the rugged vehicles of the Space Marines.[2]

The Onager Dunecrawler, rather than being a mere carrier, is absolutely brimming with advanced weaponry that can include an Eradication Beamer, Phosphor Blasters, Neutron Laser and a coaxial Heavy Stubber. It can also be equipped with an Icarus Array, a powerful anti-air package compromising twin Autocannons, a Gatling Rocket Launcher and a Daedalus Missile Launcher.[1]

The Dunecrawler maintains a crew of two meshed with their Onager host in a symbiotic relationship. Its gunner is a former Skitarii Ranger that utilizes his accuracy while the driver is a Skitarii Vanguard, his resilience to harmful energies allowing him to immerse himself in an electro-amniotic fluid that allows direct communication with the walker's Machine Spirit. Treated like expendable batteries, the crews inevitably die over time and are promptly replaced.[2]

Onager is a different name for the Asiatic wild ass (Equus hemionus) - possibly a pun on the M.U.L.E. (Mars Universal Land Engine, see above). It also is the name of a Roman siege engine.