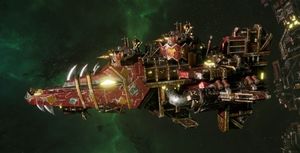 The Onslaught is a type of Ork vessel.

The Onslaught is slow and ungainly, poorly-armoured on most quarters, and lacks any sort of broadside firepower, making it only suitable for head-on attacks. As many an Imperial commander has found out, however, the Onslaught is very, very good at those head-on attacks, with incoming fire bouncing off its thick front armour as it charges in with its forward gunz blazing.[1]

Like all Ork attack ships, Onslaughts can land on planets to deliver large amounts of troops and equipment to an invasion force.[1]