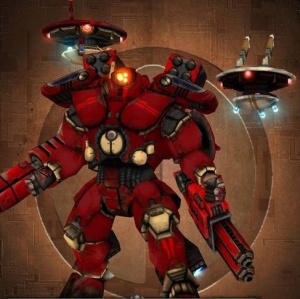 Shas'O Fal'shia Or'es'Ka was the Tau commander assigned to the Kaurava system during the events of Dawn of War: Soulstorm.[1]

Considered by some to be less merciful than other Tau commanders, Or'es'Ka implemented his unique stratergy known as Great Strength, Great Strike. He established a heavily fortified secret base on Nan-Yanoi; the second moon of Kaurava 2, armed with the massive Ar'Ka cannon, it provided a strong foothold with the overall aim of colonizing the Kaurava system for the Greater Good.[1]

Or'es'Ka wears the same type of XV22 Stealth Battlesuit armour as Kais and O'Shaserra which gains numerous upgrades such as a Jetpack, Multi-tracker and Stealth field generator as the campaign progresses. As with all Tau commanders he is heavily armed with multiple ranged weapons including a Flamer, Missile Pods, a Fusion Blaster and an Ion Blaster.[1]

Outcome of the Kaurava Conflict

If the Tau are victorious over the Kaurava Conflict, the Warp storm dissipates by itself and then the Tau commence massive colonization constructions all over Kaurava. Commander Or'es'Ka leaves Kaurava and Ethereal Aun'Ro'Yr then takes leadership over the newly pacified Kaurava system.[1]

When the Tau are defeated, Ethereal Aun'Ro'Yr is seen near the Ar'Ka cannon in a failing last stand against the player's forces, where his Fire Warrior bodyguards are massacred and shortly he is also killed. The Ethereal's death sends Commander Or'es'Ka into an emotional outburst stating: "Aun'Ro'Yr, Noble Ethereal! Oh We have lost you! We have lost all!", signifying defeat.[1]