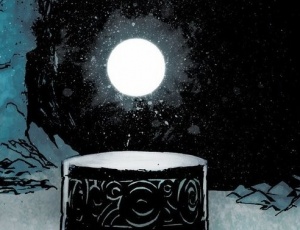 The Orb of Exyrion is an ancient weapon based on warp drive technology, capable of tearing open holes in reality to devastating effect. Last seen in the possession of the Dark Angel Baltus, its current whereabouts are unknown.[1d]

The Orb of Exyrion may have been created by the Dark Angels, as they are aware of its nature.[1d] In the Battle of Exyrion, a battle in which the Iron Warriors were aided by one of the Fallen against the Dark Angels,[1a] the weapon was activated and caused a warp storm that wiped out both forces.[1b]

The storms engulfed the Calaphrax Cluster for ten millennia, during which time the orb was used as a power sources by human survivors buried in a subterranean hive.[1c] In M41, the Dark Angels and Iron Warriors both returned to Exyrion and fought the Second Battle of Exyrion, which ended with the orb being activated again by the Dark Angel Baltus. Baltus survived the effect, though it is unknown whether the orb remains in his possession.[1d]