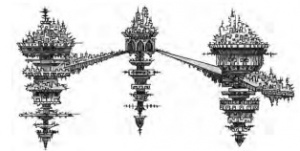 Orbital Defense Platforms are orbiting Space Stations used by the Imperial Navy and Planetary Defense Forces for defense of a world against enemy spacecraft. They are deployed within a planet or moon's gravity well and are armed with a variety of weapons. The most sophisticated Orbital Defense Platforms, those used to defend Adeptus Mechanicus worlds and key planets, have no crew at all and use complex logic engines to detect and fire at enemy vessels that do not broadcast the correct identification codes.[1]