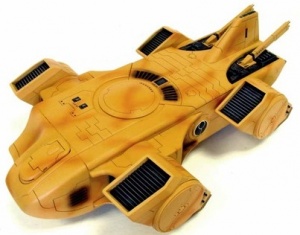 The Orca Dropship is a dedicated orbital transport vehicle of the Tau Empire. Used for moving equipment, supplies and troops from orbiting spacecraft to a planet's surface, it is not a combat vessel, primarily armed for self-defense only. Orcas are sometimes used to accomplish special missions on the field of battle, and include advanced equipment for monitoring the progress of operations.

On Taros, over two hundred Orca were estimated to have been used by the Tau to ferry supplies and troops to and from combat zones. A number of modified variants were also used to insert Tau Pathfinders and Stealthsuit Teams deep behind enemy lines, including Shas'el K'irri and his raiding force which severely damaged the Imperial Navy airbase.[1]

Prior to the Tau invasion of Pavonis, an Orca Dropship delivered envoy Aun'rai of Dal'yth along with a Hunter Cadre under the command of El'esaven for a meeting with Governor Koudelkar Shonai, his aunt Mykola Shonai and Administratum Observer Lortuen Perjed. However, the meeting was broken up by the arrival of Captain Uriel Ventris and the Ultramarines, and the Orca was destroyed when grenades fired by one of the Governor's skitarii bodyguards exploded within the troop compartment.[4]

The Orca's armament is insufficient for defending itself in a dogfight and primarily used for sweeping a landing zone of enemy forces. A pop-down turret located on the bottom of the vessel holds twin-linked long-barrelled Burst Cannons, along with a Missile Pod pre-armed with seven missiles. These are controlled by the pilot through the fire control systems, which includes a Targeting Array and Blacksun Filter.[1][3]

The ship can also be fitted with up to four Seeker Missiles to provide support for Markerlight-equipped ground forces.[1][2][3]

There have been unconfirmed reports of other variant of the Orca, armed with multiple missile racks and bomb bays.[5]

The Orca's Air Caste pilot sits within the armoured nose cone at the front of the shuttle, along with avionics processors, navigational, engine and fuel control systems. His cockpit also doubles as an escape pod, allowing him to jettison away from the craft should it be heavily damaged, and includes an automated location beacon. Information is fed to his flight control panel through the primary sensor bay, a squat dome located on top of the Orca, along with twin secure communications arrays located in the rear of the craft. These also contain an exterior air data sensor and attack warning systems.[1]

Located behind the nose cone is the tactical command center, controlled by two Fire Caste operators, which allows a Tau Commander or Ethereal to oversee operations from within the transport. The command center is connected to the main transport bay by access steps.[1]

While the Orca is armoured against enemy attacks it is still not a proper combat dropship, and will normally be escorted by Barracudas if forced to be used on the battlefield.[1] Other countermeasures include a Disruption Pod and Decoy Launchers.[3]

Powerful quad ramjets located on either side of the Orca's fuselage, combined with grav-plates positioned on its underside, give the craft exceptional speed and maneuverability in spite of its bulky size and allowing it to hover in mid-air. Orcas have been observed reaching speeds over 2000 km/h.[1][2][3]

The transport compartment of the Orca takes up the majority of the dropship's space and is accessible through a rear drop-down ramp. Seating is provided for twenty-four Fire Warriors or equivalent-sized troops such as Kroot, along with a separate command chair and transportation rack for eight Drones. Additional standing room allows for another twenty-four Fire Warriors or Gun Drones, or up to six Crisis Battlesuits or three Broadside Battlesuits secured to an automated transportation rail. Other alternative loads include six Heavy Gun Drones, four Drone Sentry Turrets, two Tetras, six Krootox or a dozen Kroot Hounds.[1]

Two or three Orcas can transport an entire Hunter Cadre, drones, battlesuits and all, onto a planet's surface. These would not usually be dropped directly in combat, more likely be inserted onto the planets surface some distance from the enemy before moving into battle. During major planetary invasions the Orca provides important support to the Manta. Whilst Mantas transport the bulk of the Tau forces, Orca's allow a Shas'o to be flexible in the deployment of his Hunter cadres, using the Orca for special missions – such as deploying Pathfinders or Stealth suits close to the enemy for scouting and sabotage missions, or to transport important personnel, such as Ethereals, Diplomats or the Shas'o commander himself, and their bodyguards.[5]

On dangerous missions or if they have to approach a battlefield, a flight of Orcas will be defended by Barracudas, whose job is to intercept enemy fighters or engage ground targets that threaten an Orca and its precious cargo. The Orca's ventral, pop-down turret mounted weaponry is not well suited to dog-fighting, although it provides some protection from interceptors attacking from below, climbing to intercept the descending Orca. The weaponry's main use is for sweep a landing zone with fire prior to a landing.[5]