Order of the Argent Shroud

The Order of the Argent Shroud is one of the six major Orders Militant of the Adepta Sororitas. 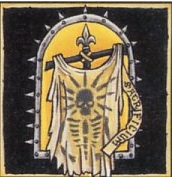 The Order was founded by Ecclesiarch Alexis XXII when the Convent Prioris was split[2b], with their first leader and honoured Saint being Sister Silvana.[5a] They are based on Terra within the Convent Prioris.[1] Their armour is silver along with white cloaks lined in red.[2a] Silvana was martyred shortly after they were split from the Order of the Ebon Chalice and before their own identity had been fully forged. The fledgling Order took their name and symbol from the silvery impression of her skull upon her death shroud.[7]

Like their patron saint, the Order is altruistic and strong of faith. The Sisters of the Order, like Silvana, rarely speak, preferring to let their actions speak for them, and often these actions speak of selfless heroism.[7] They avoid formulating grand strategems and rarely communicate intended tactics to their allies, irritating many Imperial generals. They seek to emulate the mysterious silence of Silvana by speaking very little and by entering long periods of complete silence whenever they engage in training. However, this silence does not preclude them from prayer or worship and, like the members of other Orders, they still chant hymns of purgation as they march into battle.[8a]

On the field of battle, the Argent Shroud is known for its lightning-fast assaults and maneuvering capabilities. They commit themselves utterly to the offensive, often leaving themselves cut off from support. They alleviate this weakness by crying out for Silvana to protect them, which seems to give them a miraculous degree of luck. Enemy fire will often veer off course and blades will fail to hit their intended mark. Those Sisters who fall often save their entire squad from annihilation with their dying action, throwing themselves into the line of fire just as their Matriarch would have done. There are countless legends in which the Sisters of the Argent Shroud emerged from battles that Imperial logisticians had calculated to be unsurvivable. Due to their propensity for hit-and-run assaults, the Sisters of the Argent Shroud have become some of the deadliest and most experienced shock troops of all the Sisters of Battle. As such, they boast large contingents of Dominion squads who also serve as the leaders in many of the Orders rites of worship.[8a]

The majority of the Argent Shrouds sanctuaries lie in the region of space that abuts the Great Rift. During the Noctis Aeterna, many of these sanctuary worlds were thought lost. It is estimated that as much as 80% of the Order may have been swallowed up by Warp Storms. But in the years since, they have continued to fight on against Chaos forces without showing signs of diminishment. Many of the preceptories that were thought lost have since been seen in battle, though they say nothing of their sanctuary worlds.[8a]

A peculiarity amongst the Order lies with how they treat their dead. While others may shout out prayers to guide the fallen souls of the fallen, the Argent Shroud say not a word. Death is met with silence, and it is believed that this is due to the Orders belief that martyrdom is a luxury and a reprieve from duty. Yet the dead of the Order are still handled with great care and solemnity after the fighting has finished. The martyrs are removed from the battlefield in sombre processions, their wounds cleaned and dressed, their armour repaired and polished, and they are laid to rest for seven days in the sanctuary in which they served. After that, their bodies are removed and what becomes of them is not known by any outside the Order.[8a]

Canoness Preceptor Chrisima led a Preceptory of the order on Charak to cleanse its streets of mutants by Flamer at the command of the Confessor Petasus.[5b] At some point prior to the Third Armageddon War the Order had carried out attacks on the secretive Angels Vermillion Chapter.[3]

The Order deployed seven companies to Armageddon during the Third Armageddon War: four companies were deployed to the Fire Wastes with the remaining three being split into demi-companies and deployed throughout Armageddon Prime and Secundus.[3] In one incident during the war, they, along with militia forces and the Flesh Tearers Space Marine Chapter trapped and destroyed forces belonging to Warlord Rukglum, only to witness the Flesh Tearers expand their assault and attack the Armageddon militia. Not wanting to face their former allies, the Order withdrew, later reporting the incident to the Inquisition and demanding their destruction.[4] In another instance, the sisters garrisoning the Temple of the Emperor Ascendant in Hive Helsreach were wiped out and their charge destroyed.[6]