Order of the Ebon Chalice

The Order of the Ebon Chalice is one of the six major Orders Militant of the Adepta Sororitas.[2a] 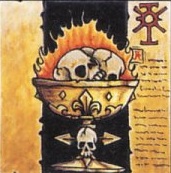 The Order was founded by Ecclesiarch Alexis XXII when he split the Sisters of the Convent Prioris[2b] on Terra, where the Order remains based[1]. Their first leader and most honoured Saint is Alicia Dominica.[4] Their colours are black armour, white cloaks with red linings. Their weapons are a deep red. These were the original colours of the Convent Prioris[2a] and even further to the original uniforms of the Daughters of the Emperor[5] which the Order inherited when the Convent was split, and has been unchanged for four thousand years.[2a]

Though not originally recognized under the current name, the Order of the Ebon Chalice represents the original and oldest Order Militant, the direct continuation of the original founding as the Daughters of the Emperor, with combat and religious doctrine, like their uniforms, unchanged for four thousand years.[5] The Order's symbol, a flaming skull-filled chalice, is a representation of the terrible knowledge imparted to Dominica when she was brought before the Golden Throne.[7] During the early purges and Wars of Faith led by Dominica, she carried the Grail of Ages with her to war.[11a]

While the other Orders battle in the far reaches of the Imperium, the Ebon Chalice dedicates itself to safeguarding Terra and Segmentum Solar. They have become renowned for moving across worlds in the Segmentum, rooting out Mutant conclaves, servants of Chaos, traitors, and Xenos infestations. As they brought more territories under their care, they were able to expose scores of Governors and Imperial Guard officers whose practicies did not conform to the exact letter of the Imperial Creed. Preachers and Confessors were called upon to make examples of these sinners and where their enforcement was met with resistance, the Ebon Chalice launched violent purges. They revere the Holy Trinity of their order, which consists of the Emperor, Ecclesiarch, and Matriarch. It is said that the highest ranked members of the Order learn the truth that Dominica learned before the Golden Throne.[11a]

Since the formation of the Great Rift the Order has been fighting to keep Segmentum Solar secure. This has brought them into combat with several Chaos warbands, most notably the Blades of the Despoiler. They have taken heavy losses in these campaigns, and despite a constant stream of new recruits from the Schola Progenium few prove apt enough to meet the Order's high standards. This has left them numerically lacking, though they continue to fight on.[11a] The Order proved instrumental in the early Indomitus Crusade, fighting alongside Guilliman's forces to save the most strategically vital worlds of Segmentum Solar.[11c]

On the planet Belatis IV the Order have a Preceptory stronghold, where their Priory dominates the Talisa Pass — an important pilgrim route.[8b]