Order of the Sacred Rose

The Order of the Sacred Rose is one of the six major Orders Militant of the Adepta Sororitas. 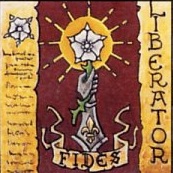 The Order is based on Terra within the Convent Prioris[1] and was founded in honour of Sister Arabella[2a] along with the Order of the Bloody Rose by Ecclesiarch Deacis VI in mid-M38[3a]. Their colours are white armour, black cloaks with red linings and red weapons.[3b]. The order strives to emulate their patron saint and her virtues of discipline, even-temperament, and resolute determination. This resolve to stay calm in battle has particularly benefited Retributor Squads, who use her as a role model to avoid doubt and rash action while wielding their heavy weapons.[6]

The Order avows that they are not only devout servants of the Emperor but also conduits of his will. They believe that their words and actions are guided by his divine wisdom and teach that victory comes from faith and faith alone. They wage Wars of Faith to regions long thought lost in the darkness, freeing Imperial planets from the yoke of Xenos or heretics. They establish citadels in the most remote corners of the Imperium. This has resulted in forging a sizable parish in Ultima Segmentum, but like Arabella they bring their faith to bear across the Galaxy.[9]

On the battlefield the Sacred Rose advance in perfect tactical harmony and discipline, adapting fluidly to the shifting tides of battle. They press their attacks wherever their enemies show weakness, and where they show strength the Sisters stand firm. They combine their faith with physical prowess, creating miracles where they may suddenly burst into speed or see foes spontaneously combust. They often go to war alongside large numbers of Ecclesiarchy followers such as Priests or Zealots. As such, even a small mission are rarely short of soldiers. These great armies of the faithful go to war with the Sisters of the Sacred Rose forming their elite core. The Sisters welcome these auxiliaries, believing that the Emperor can work even from the lowliest of his servants. This ability to draw others to their cause has been instrumental since the Great Rift has opened. The majority of their sanctuaries lie deep within Imperium Nihilus, but few have succumbed to the nightmares that have been unleashed across the Galaxy. The Sisters have remained a steadfast bastion of hope, preventing fear and panic from consuming their worlds. They maintain patrols on these worlds that execute any who express any doubt in their security as well as those who show the slightest sign of mutation.[9] 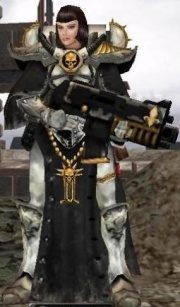 Sister of the Order of the Sacred Rose