Order of the Valorous Heart

The Order of the Valorous Heart is one of the six major Orders Militant of the Adepta Sororitas. 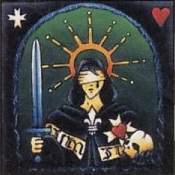 The Order is based on Ophelia VII within the Convent Sanctorum[1], founded when the convent was split by Ecclesiarch Alexis XXII[2b]. Their original leader was Lucia, one of the Sisters who accompanied Alicia Dominica to the Golden Throne during the Age of Apostasy .[3a] Their colours are black armour, black cloaks with a white lining and white gloves. The only trace of red is on their Ecclesiarchal symbol. These colours are the original colors of the Convent Sanctorum, which the Order inherited after the Convent was split in two.[2a] The Sisters forever honor the gruesome tortorous death of Lucia, and were eventually able to hunt down those responsible for it. What became of them is not known, but it is said that Hospitallers from the Order of the Silent Vow which specialize in pain enhancement and life extension are still busy under their sanctuary of Lucia's Reprisal.[7a]

Sisters of the Order are driven by the belief that they still must atone for the Sisterhood's acts as an unwitting accomplice to Goge Vandire during the Reign of Blood. Like their patron saint, the Order is highly penitent, always striving for atonement for even the slightest perceived sin. A disproportionate number of Sisters in this Order exile themselves to the Sisters Repentia compared to the other Major Orders. Because they are constantly reminded of the Reign of Blood, Sisters of the Valorous Heart can be particularly suspicious of those who would call themselves prophets of the Emperor.[5]

The example set by Lucia and her martyrdom has led the Order to employ methods unique among the Adepta Sororitas. At the onset of battle, its Sisters pray to the Emperor and their Matriarch for strength before launching an offensive which cut off their foes supply routes and line of retreat. With the enemy locked in place, they begin sabotaging any infrastructure in the area such as water, food, and fuel supplies. They ultimately create a grinding war of attrition in which the hardened warriors of the Sisters excel. When on the defensive, their infamous grit allows them to sustain grievous punishment. Due to their methods of combat, they frequently employ large numbers of Exorcists and Retributor squads. Given their gruesome methods of battle, it is unsurprising that many of its Sisters bear gruesome scars. Sisters of the Order consider this a blessing for it allows them to better understand the pain of their Matriarch. As a result they rarely accept pain killers during battle, even when amputation is required.[7a]

The training and rites of the Order have also been adapted to pay homage to their founder. Upon induction, every Battle Sister must memorize the hymn known as the Passion of Saint Lucia. They recite all 555 verses at specific points throughout the day, and also routinely subject themselves to acts of excruciation.[7a]

The bulk of the sanctuaries of the Valorous Heart lie deep in Ultima Segmentum, with the vast majority having been established in wars against Xenos and traitors. Many of these sanctuaries have since been attacked by Daemons and Dark Eldar raiders since the formation of the Great Rift. Though stranded within the Dark Imperium, they have steeled themselves to endure whatever torments may be thrust upon them.[7a]