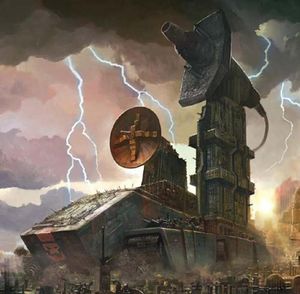 Ordinati are leviathan sized warmachines created by the Adeptus Mechanicus overseen by the Centurio Ordinatus.[1]

The Centurio Ordinatus is the Mechanicus organization responsible for all aspects of these machines. Every individual Ordinatus is a unique construction and named for the world on which it was first employed or built. Each Ordinatus is unique in that it was designed for specific purpose, for a particular battle. This is why the different Ordinatii have very specialized weapons configured for their intended role. Some were designed to devastate whole cities with a single shot, some devoted to dealing with enemy Titans, while others can transport entire regiments of soldiers under the earth. When the Adeptus Mechanicus was torn apart by civil war during the Horus Heresy, both sides unleashed all manner of Ordinatus upon each other.[1]

After the Heresy, many Ordinatus were abandoned, lost or simply forgotten, remaining hidden in secret armouries, deep underground or in remote locations. Perhaps the greatest military weapons ever conceived, the rediscovery of an Ordinatus often results in civil war, as the finders begin fighting over the great prize.[1]

Before they can be sent to war, Ordinatus must be ritually blessed by the Lord of the Centurio Ordinatus. Failure to do so is considered tech blasphemy of the highest order. Due to the fact that each Ordinatus is a priceless relic of the Mechanicus, they are only activated and employed under the most dire of circumstances. Even a conflict on the same scale as the Third War for Armageddon was not considered motivation enough to even consider fielding one without performing the proper rituals.[3b] An Ordinatus is transported to its warzone by a Mechanicum Macro-Transport.[15]

Each Ordinatus is protected by an energy-intensive dispersion field which deflects projectiles and energy bolts. In addition, their crews are highly trained tech-guard warriors.[Needs Citation]

The Ordinatus Minoris Macro Engine was a sub-type of more commonly encountered Ordinatus during the Great Crusade and Horus Heresy. Smaller than the colossal Ordinatius Primaris, these vehicles were nonetheless still gargantuan and rarer than a Battle Titan. Few Macro-Engines followed a broad class, and most were unique constructs designed by their Forge World of origin. Only a handful of Forge Worlds had the resources or authority to construct these engines.[5]