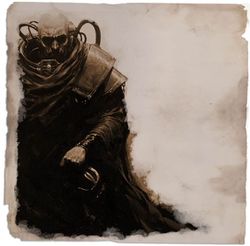 The Ordo Chronos are an Ordo Minoris of the Inquisition that combat and prevent anomalies in time due to the use of Warp travel.[3]

The Ordo was established to study the anomalous passage of time during interstellar travel through the warp. This is because of the fact that time works differently within the empyrean; in rare circumstances, vessels can arrive at their destination much later than intended - for example taking centuries to arrive whilst only months have passed onboard the vessel while within the warp. Tales of such dreadful fates are common knowledge amongst void travellers and accepted as one of the risks of warp travel. In extremely rare circumstances vessels may even arrive back into realspace at a time before they actually set out.[3]

This Ordo is believed to have been established to study the temporal anomalies or other such effects that might emerge within the vicinity of the Jericho Reach with a view to controlling or combating them. Inquisitors of the Ordo Chronos were particularly concerned with the effects of time distortions that could lead to a disruption of the proper flow of time due to unintended interventions in the past. Such actions are deemed as interference in the fate of Mankind and against the will of the God-Emperor. Over the course of centuries, the Ordo Chronos expanded their mandate to relate to all forms of temporal phenomena and include other such events that might be a deliberate attempt to interfere with the flow of time.[1]

The Ordo Chronos was thought disappeared without a trace. Some believed that they were in hiding whilst others hold the view that they came into competition with renegade factions of the Adeptus Mechanicus in the pursuit of long forbidden technology. This is not the first Ordo to have vanished over the millennia - with some going merely quiescent for a period, whilst others were purposely hiding so deep that even other Inquisitors could not find them.[1][3]

Before the disappearance of all Ordo Chronos members, the Deathwatch partook in a joint operation with them.[2]

The Ordo Chronos once again appeared in Imperial history in M42 during the Chronostrife. The conflict erupted when the reborn Roboute Guilliman attempted to reorganize the Imperium's dating system and create a reliable history. The result was a bitter internal conflict within the Ordo Chronos that is currently ongoing.[4]