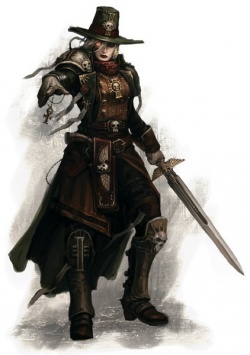 The Ordo Hereticus (known colloquially as Witchhunters) is one of the three major orders of the Inquisition. Their specific role is protecting mankind from itself, by combating such internal threats as treason, mutation, heresy and witches. They are aided militarily by the Adeptus Ministorum's Sisters of Battle. Because of its vast jurisdiction and mission, the Ordo Hereticus is the largest of all the Inquisition's Ordos.[2b]

The Ordo Hereticus was founded much later than the Ordo Xenos and Ordo Malleus, created after the Age of Apostasy which occurred during the second century of the 36th millennium. The Apostasy and the many heresies that took root during the anarchy (most notably the Plague of Unbelief), had severely destabilized the Imperium in a way not seen since the Horus Heresy.[1]

The Ordo Hereticus was formed as a check on the Ecclesiarchy, ensuring that another man like Vandire could not gain the level of power and control he did. Although the Ecclesiarchy has its own internal regulatory bodies, it is still the role of the Inquisition to monitor all organizations of the Imperium, including the Ecclesiarchy.[12] 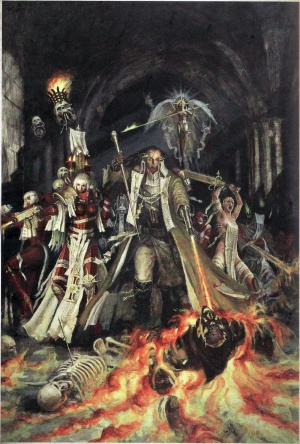 Although originally concerned with monitoring the Ecclesiarchy, the Ordo Hereticus has expanded its jurisdiction to encompass the other internal threats to the Imperium: witches, mutants, heretics, psykers, traitors and other deviants among mankind. Hereticus Inquisitors are the most feared members of the Inquisition, as their focus is on Mankind itself. The arrival of an Ordo Hereticus Inquisitor on a world is met with fear and awe, as no one but the Inquisitor himself knows where his attentions will fall.[1]

The members of the Ordo Hereticus monitor the Wars of Faith inspired by the Ecclesiarchy, to ensure they remain within the objectives assigned by the Ecclesiarch. They ensure that the teachings preached by priests of the Imperial Cult remain true to the spirit of the Emperor's will. They regulate the wealth and territory claimed by members of the Ecclesiarchy, to prevent higher members of the institution from gaining more power than is appropriate.[Needs Citation] The Ordo Hereticus is also called upon to monitor other Imperial organisations for internal threats, including the Adeptus Arbites, the Space Marines, and even the Inquisition itself. Only the Emperor is beyond their jurisdiction.[1]

This Ordo raises its own fleet and also provides the ship crews for the Grey Knights. Those selected candidates each possess a complex psycho-trigger that was built into their minds by way of sleep-indoctrination. This allows a Grey Knight to wipe the higher brain functions on order, thus preventing them from taking over a vessel if they turn against the Imperium.[3]

The Adepta Sororitas, also known as the Sisterhood or the Daughters of the Emperor, are a penitent organisation devoted to the worship of the Emperor. Although there are many different Orders within the Sisterhood, the most well known are the Orders Militant, forming the military arm of the Ecclesiarchy.[1]

After the Age of Apostasy, the Ecclesiarchy was forbidden from possessing any "men under arms" by the Decree Passive issued by Sebastian Thor. A loophole was found and exploited by refounding the Daughters of the Emperor as warrior-nuns after merging them into the greater Sisterhood. The Sisterhood is an internal regulator, along with being an external army, ordered to ensure that true faith is spread throughout the Imperium and the galaxy.[Needs Citation]

Although completely unalike in their methods (where Inquisitors are analytical and suspicious, the Sisters of Battle are zealous and unquestioning of dogma) the Sisters and the Hereticus also have the common purpose of eradicating threats from within. Recognising this, the two organisations joined together in their efforts, a relationship formalised by the Convocation of Nephilim. Although the Sororitas and its Sisters of Battle remain part of the Ecclesiarchy, they respond when called upon by Inquisitors of the Ordo Hereticus.[Needs Citation]