The Ordo Sinister has a unique status within the Imperium, for it is they alone who are able to employ terrible weapons forbidden to even Primarch and Planetary Governor alike. Many of these technologies are of the Sinistrum category, those weapons designed to amplify the powers of a Psyker, often at the cost of their own life. These devices have since been installed upon Warlord Titans of the Ordo Sinister, forming psychic god-machines known as Psi-Titans.[1b] 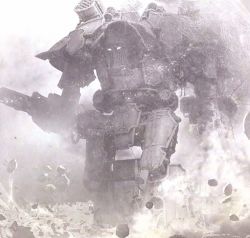 The Titans of the Ordo Sinister possess a unique strength, combining the might of a Titan with the power of Psykers locked in place and bound to the will of the Preceptor-Intendant, who is the Legion equivalent of a Princeps. Each of these officers is a Blank immune to the Warp, allowing the Titan to harness psychic power on the grandest of scales, from eradicating their foes to mending damage as if it had never been inflicted. It is said that a single Titan of the Ordo Sinister could bring a world to heel simply by walking upon its surface, for its very presence instills terror.[3a]

The Ordo Sinister sees itself as the left hand of the Emperor and does not answer to any Imperial authority save the Master of Mankind. This even includes Primarchs. During the Siege of Terra, the Ordo Sinister only agreed to ride to war when the Emperor ordered them to do so.[4a]

It is not known when exactly the Ordo was formed, but it is said they were formed by the hand of the Emperor himself.[3a] They first gained prominence in 967.M30 when the Emperor issued a Writ of Compulsion which demanded that 25 Warlord Class Titans be issued to Terra for an unknown reason. The Mechanicum was divided as to whether or not to acquiesce until the Fabricator-General met with the Emperor and agreed to the demand. Of the 25 Titans, 8 came from reserves on Mars while the remainder came from Metalica, Phaeton, Arachnus, Caradryn Magna, and Voss.[1b]

Later, a single one of these Titans, fashioned in terrifying livery, managed to subjugate the entire rebellious world of Skagan-VI without firing a single shot. During the Defence of Helioret the Ordo Sinister defeated the insane Eldar Corsairs and Wraith Constructs of Craftworld Magc'Sithraal, a foe even Sanguinius and the Blood Angels could not bring to heel alone.[1b]

The Ordo Sinister operates from four independent Chambers, each comprising five modified Warlord Psi-Titans and operating from a "fortress-crypt" on Terra. These fortresses are based in the Occidentalis, Orientalis, Polaris, and Borealis regions of Terra.[1b] Each Chamber additionally maintains approximately 1,000 Secutarii as support troops.[1a] The Chambers of the Ordo Sinister are each commanded by a First Prefect who is a Blank.[4a]