"Compassion is reserved for servants of the Emperor: aliens deserve only our scorn."
- Inquisitor Czevak, Teachings on the Unholy.[Needs Citation] 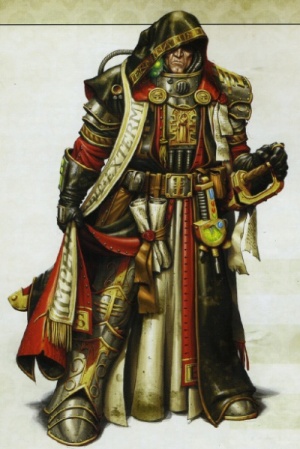 The Ordo Xenos is one of the three major Ordos of the Inquisition, dedicated to countering the threat of alien species. Their military arm is the Deathwatch.

The Ordo Xenos was created in the aftermath of the War of the Beast in 546.M32 to prevent another alien threat on the level of The Beast from ever arising.[7] Created alongside the Ordo Malleus[7], it was made to investigate and catalog xenos species, and destroy any classified as a threat to the Imperium. This jurisdiction has been expanded to any members of the Imperium that deal with xenos, trade (or deal) in their technology, or seek to hide or protect hostile alien species from Imperial forces. Inquisitors of the Ordo Xenos are devoted to their cause (fanatically so, in many cases), and are among the greatest force that can be wielded against any given xenos species.[Needs Citation]

Armed with the best human and xenos technology known, extremely knowledgeable about their foe, unflinching in their mission, the Ordo Xenos can respond to any possible xenos threat. Their tactics vary depending heavily on the situation, species of xenos involved, and level of xenos influence on the local population. Where the threat is subtle they will use guile and stealth, wielding their power as a scalpel is used to cut out a cancerous growth. When the alien menace is great, the Inquisitor can enlist the aid of entire regiments of Imperial Guard and Space Marines. When the threat is too great for even these to handle, the Inquisitor will call on the elite battle-brothers of the Deathwatch. In extreme cases, entire planets are known to be destroyed through Exterminatus. Because of its historical involvement in mass xenocide, the Ordo Xenos has the most blood on its hands of any other Ordo within the Inquisition.[4]

A known subdivision of the Ordo is the Departmento Analyticus[12]

The Deathwatch, the Chamber Militant of the Ordo Xenos, are a unique force of Space Marines composed of individual warriors from many different Chapters. They are specially trained by the Ordo Xenos to counter any and all known xenos species. From ancient times an oath has stood between the Adeptus Astartes and the Ordo Xenos that the Space Marines would provide them with necessary soldiers. They are required to serve a full term with the Ordo Xenos before being returned to their Chapters. Upon induction into the Deathwatch, a Space Marine's power armour is painted black. The chapter insignia, normally located on the left shoulder, is moved to the right shoulder and is replaced by the Deathwatch insignia. The left arm is painted silver to avoid angering the armour's machine spirit.[Needs Citation]

They operate in Tactical Squads called Kill-Teams. Each Kill-Team consists of soldiers from all different chapters. However, it is not uncommon for rivalry to re-ignite among different chapter members. The Kill-Teams are heavily armed, and capable of operating independently in a hostile xenos environment. If the situation calls for it they have been known to use xenos technology against their current enemy as a means to an end. They are led into battle either by a Watch Captain, a Librarian or in some cases even Inquisitors of the Ordo Xenos.[Needs Citation] Being incredibly fluid in their deployment abilities, they can operate in any environment and are known to even infiltrate Tyranid Hive Ships.[1]