Orikan, also known as Orikan The Diviner, is a Necron Cryptek astromancer, able to calculate the events of the future from the pattern of stars. He is currently in service to the Sautekh Dynasty.[6]

As a Necrontyr at the time of the War in Heaven, Orikan was born into a family of warriors but proved too physically frail to be recruited into the Immortals as his father had wished. After failing from the Immortals Temple, he instead looked into the art of mysticism.[6c] Eventually becoming an accomplished astromancer, Orikan was the only dissenting voice to the idea of working with the C'tan. His warning was overruled by the Silent King, Szarekh.[4] Orikan refused Biotransference and had to be forced into the bio-furnaces in chains.[6b]

It is said Orikan predicted the the Fall of the Eldar, the rise of the Imperium, the Horus Heresy, and the coming of the Tyranids, many thousands of years before each came to pass. He can even divine lesser occurrences such as the destinies of individuals and the movement of fleets. Though his studies are widely used, few amongst Orikan's Cryptek peers trust him due to the insolence and mocking scorn in which he treats the nobility of every rank, even mighty Necron Overlords. However this is largely tolerated as the benefits of his skills greatly outweigh any offense caused by his manner and Orikan knows the plans of the rivals long before they do, making it almost impossible to best him anyway.[1]

Though he is a skilled astromancer, his predictions are not flawless and unforeseen events can change his calculations. Warp travel is such an event, its turbulent nature defying any prediction. Under such circumstances, he is forced to employ closely guarded chronomantic abilities and travel backwards in time to make sure that his prophesied future events are back on track. When the Imperial Navy dockyards at Helios VI were left standing against Waaagh! Skullkrak due to a timely intervention by the Silver Skulls Space Marines, in defiance of his original prophecy, Orikan traveled back in time and ambushed the Space Marines, ensuring that his original prediction came to pass and his reputation was intact. He takes great care to keep his advanced time traveling abilities from his peers, ensuring that he holds an advantage over them.[1]

Orikan takes great care to keep his machinations hidden from his peers. A thousand millennia of planning and preparation are about to come to fruition. Once the stars are in proper alignment, Orikan will finally embrace his true destiny; his physical form will become a vessel for celestial energies and transform him into a being of terrible power. The temporal traps he has set throughout the galaxy will activate and Orikan will manipulate time itself to his advantage.[3] Orikan sees the future of the Necron race as transforming into beings of pure energy as opposed to regaining their organic forms.[6]

Orikan has a long-standing rivalry with Trazyn the Infinite that began from their differing ideologies on the past and their agendas for the future.[6] The two engaged in a ten thousand long struggle over access to the tomb of the famed Necrontyr Overlord Nephreth on Serenade. During the many clashes between the two, Orikan was emtombed on Serenade as it was subjected to Imperial Exterminatus. It took Orikan over 100 years to dig himself out, but due to having to constantly reset time whenever he got caught again the process for him was over 2,000 years.[6d] The duo were forced to reconcile and join forces when it became apparent that Nephreth's tomb was a myth set up by a shard of the C'tan The Deceiver, who had manipulated both into freeing him.[6e] Using an Eldar gemstone provided by Trazyn, Orikan was able to transform into a god-like being of light to defeat the C'tan Shard. However despite their temporary alliance he still swears revenge against Trazyn.[6f]

In battle, Orikan wields a unique Staff of Light known as the Staff of the Tomorrow.[5] He makes use of his advanced chronomancy in battle, able to foresee future enemy moves and even reset time should actions play out against him.[6] Upon absorbing enough energy, Orikan can transform into a being of pure light capable of besting even a powerful C'tan Shard.[6e] 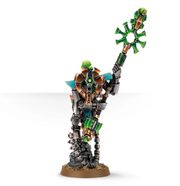