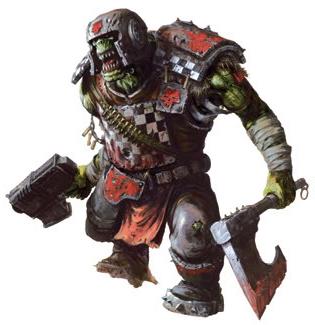 Boyz is the Ork term for the numerous rank and file Ork warriors which form the core of any Ork army.[2a]

Ork Boyz are about 2 metres (6'6") tall[1a] when standing fully upright and vary greatly in their specific battlefield roles. Ork Boyz who occupy the same field of interest often band together in groups known as Mobs,[2b] frequently these mobs are led by an Ork Nob who epitomises the group's skills.[2a] As basic Ork troops, Ork Boys vary in weaponry and equipment. They are usually divided into the following categories.

Note that Ork Boy can fall into several categories, for example, if he is equipped with Shoota, 'Eavy Armour and Stikkbomms and rides into battle on a Trukk he would be a Shoota Boy, a Stikk Bomma, 'Ard Boy and Trukkboy at the same time.

Ork Boyz with a preference for the shooty side of combat are called Shoota Boyz and are armed with shootas instead of the basic slugga and choppa.[2a]

Stikk Bommas are those gifted with the knowledge of which part of a grenade is thrown once the pin is removed. For this reason they are equipped with stikkbombz but otherwise they are effectively identical to Slugga Boyz.[1b]

'Ard Boyz cover themselves in thick scrap metal plates that they've scavenged. This is the stuff of their armour and despite poor maintenance, the result is armour than can withstand most small arms fire. This gives the 'Ard Boyz the appearance of walking magnets though it is considered unwise to tell them.[2a][2c]

The Warbike of a Warbiker is his own individualised steed. Massive twin-linked dakkaguns are mounted upon it and the oil it consumes sends great clouds of smoky exhaust fumes out in pillars behind its wheels. Boyz who enjoy riding Warbikes are often Speed Freeks. Orks who get their adrenaline fix from the speed and uncontrollability of their bikes.[2h]

Warbikers are armed with Sluggas and Choppas and operate in Mobs of 3 to 12, which may include a Nob.[2k]

Physically identical to other orks, madboyz are not quite the same in the head. Mobs of Madboyz are considered to be a great sign of luck and good fortune for an ork settlement or Waaagh! however their presence is not always appreciated due to their outlandish and idiotic behaviour. Within a settlement Madboyz may spend their time in self-constructed eccentric shanty towns apart from other orks. Here they randomly hold shouting matches at the worst possible moment and search for non-existent lost items in the dwellings of other orks- not wise by any standards given the territorial nature of the race. When they go to battle Madboyz often band together and provide an unintentional retinue for a weirdboy, dressed in bizarre clothing and wielding anything that takes their fancy, from unconventional choppas to rusty buckets filled with pterasquirrels. The unpredictable movements and behaviour of Madboyz has beaten the greatest tacticians as their anarchic unhinged nature means that they are just as likely to pull apart an enemy squad with their bare hands as they are to become engrossed in picking each others noses in the heat of battle.[2l]

Flyboyz are similar to Ork Speed Freaks, save for the fact that they get their thrill from flying. Members of the Flyboyz are not satisfied with the high speed of ground based vehicles and thus take to the air as part of their quest for greater acts of exhiliration. [3]

Beast Snagga Boyz are a type of Beast Snagga that unlike their Squighog Boy brethren prefer fighting on their own two feet.[8]

Boyz are known to ride beasts of war into battle. These include Boarboyz on Warboars[6] and Squighog Boyz who ride Squighogs[7]. 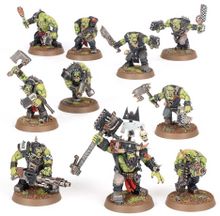