"There are beasts among the stars, beasts that would crush our lives, make ash of our worlds and break all that we hold sacred. The beasts wait in the dark and shunned reaches like the things glimpsed in the forests of old, things that looked out with red, shining eyes and hearts filled with the joy of ruin."
- from Remarks on the Nature on the Unknown by Estivan Mauritin, advisor to Rogue Trader Hiram Sult.[11]

The Orks are the most widespread of the sentient races, inhabiting worlds across the whole of the known galaxy, and probably throughout whole universe. There are Ork realms, Ork Empires and untold numbers of isolated Ork Worlds. Wherever the humanity may travel in the universe, there are Orks. The universe is Orkdom, the domain of Orks and the Eldar say that the Orks have become part of reality itself.[7][2] 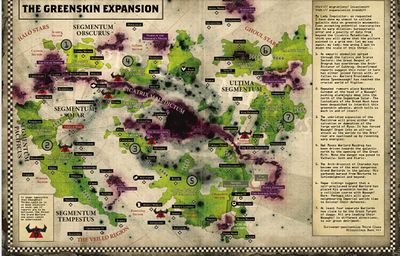 Very little is known about the beginning of Ork expansion. It occurs sporadically, giving them an entirely random pattern of settlement through the galaxy. Their main way of expansion is known as Waaagh! — combination of mass-scale migration and holy war through which Orks have managed to get hold on innumerable worlds all over the galaxy. Their expansion is aided by their natural toughness, allowing them to survive in the harshest of conditions and colonise very inhospitable worlds. Particularly successful Waaaghs! capture great swathes of space, resulting in creation of Ork Empires. These are not connected to each other and despite their control over a significant part of known space, Ork Domains are not a united or cohesive organisation - rather they are a collection of thousands of individual territories and empires. These independent factions are as likely to fight with each other as they are with any other species which are sometimes even hard to find in Ork-controlled territories. Due to specifics of Orkoid reproduction, Ork-controlled planets are very hard to recapture and even failed Ork invasions allow them to get hold on the planet. It is widely known that once the world has seen the war with Orks, it is never free from it again as new generations of Feral Orks grow in distant corners to begin new years of bloody conflicts and giving birth to even more Orks.[7][2]

A particularly successful Ork Warlord may capture a great number of planets and form an Ork Empire. There are many such empires in the galaxy. Some, such as Ork Empire of Bork are relatively new, while others pre-date the Imperium itself. These empires often fight with each other but sometimes unite their forces in a truly apocalyptic conflicts. Known Ork Empires include:[7][2]

This empire is one of the biggest, covering Charadon Sector. Its ruler is known as the Arch-Arsonist of Charadon. Despite its power, in the face of the Tyranids the Empire of Charadon is beginning to wane.[15] Current Arch-Arsonist, Snagrod, recently captured a large part of Loki Sector during Waaagh! Snagrod and is believed to be leading a new Waaagh! into the Ultramar.[1a][2a]

Known worlds of the Ork Empire of Charadon include:

This empire is one of the biggest, covering Octarius Sector. Its ruler is known as the Overfiend of Octarius. Current Overfiend, Blaktoof, is currently leading the counterattack against Hive Fleet Leviathan in the Octarius War.[1a][2a] Known worlds of the Ork Empire of Octarius include:

Former Ork Worlds in the Empire: 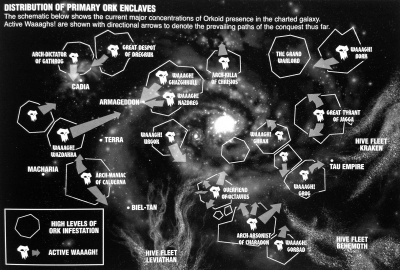 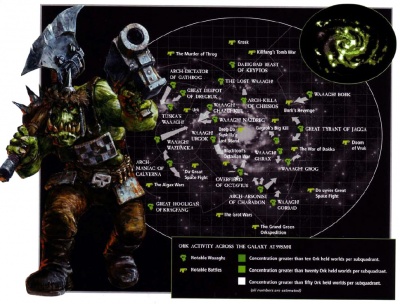 Ork Worlds are any planet where Orks are the dominant species. These can be worlds that have been occupied by Orks for generations, or more recently conquered planets where Orks have exterminated or enslaved the original populace. Orks constantly capture new planets and lose old ones. Known Ork Worlds not included in listed Ork Empires are:[7][2]