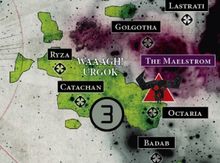 In the closing years of the 41st Millennium, the Imperial Inquisitor Kryptman would redirect a portion of the Tyranid Hive Fleet Leviathan at the Octarian Empire. The resulting war has badly bled both the Tyranids and Orks, and it has yet to be determined which side will emerge victorious.[1]

After the formation of the Great Rift, Khornate forces invaded the Octarius Sector, creating a three-way war.[4] The Swarmlord eventually launched an all-out push that saw the Empire's capital of Octaria assailed. After an extended campaign Octaria was consumed after the Overfiend himself was slain by the Swarmlord. Now the Empire exists in a fragmented state, with multiple Warlords vying to become the new Overfiend.[6]