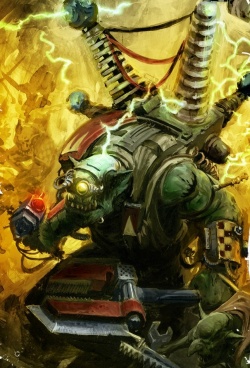 Despite often being looked upon as barbaric, Orks are highly advanced in certain fields, one of which is energy field technology. Ork Mekboys often use energy fields of varying powers to protect their creations in battle. Most of these fields resist objects travelling at high speeds, but allow slower intrusions. They are very effective despite usually being covered in crackling electricity or spewing clouds of noxious smoke.[3]

Some Orks use personal field generators to protect themselves in combat. They work by projecting a powerful energy field around the bearer which protects him from incoming attacks. Some of them protect its user against incoming damage, while others make them invulnerable for a time. Some particularly tricky devices may be used to protect certain allied units against damage.[6]

Big Meks often build and customise powerful force field projectors they use to protect themselves as well as their Boyz and vehicles in the vicinity. It will absorb enemy fire, crackling with energy and protecting everything under its bubble.[1a] These devices are carried on a Big Mek's back or are sometimes attached to Mekboy Junkas, walkers - from Killa Kans to Stompas or even buildings.[2b][5][6]

Some Mekboys install field generators on special robot walkers, programmed to advanced after the herds of Gretchin and Snotlings and provide some protection until they engage in combat. Known as Runtbots, these walkers possess very unreliable fields that can collapse at any moment, but some Runtherds still use them sometimes to protect their herds.[10]

Some Ork super-heavy vehicles such as Stompas are protected by a number of energy shields called Power Fields. They are similar to Imperial Void shields, but are much less reliable, and typically are unable to be raised again (at least in battle) once collapsed. Like Void shields, they are useless at close distances but until collapsed, take all incoming damage.[2a][4]

Ork spaceships are ramshackle constructions and most of them wouldn't work if not for the special fields closing the gaps and keeping the air inside. The same fields close the entrances to ork launch bays. Some spaceships feature unusual components - a powerful shield generators protecting them from enemy fire. Similar to other Ork energy fields, it crackles with extra power, sometimes flaring to life to block the most powerful hits, but sometimes catastrophically failing without any warning.[9]