Ork Language is a crude compilation of various dialects and tongues used by Orks. 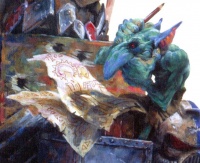 Language that Orks speak reflects their nature, being a crude and unsubtle one, but possessing more insults and war terms than any other. It is known to consist of many dialects, that vary between different Clans and worlds.[4] These dialects are changing as Orks migrate around the galaxy, contacting other species and adopting words from their languages. Orks often loot things they like from other races and particularly useful words and phases are no exception.[1] Because of it, Ork language includes many loan words, including the ones taken from Low Gothic, however, due to the their physiology Orks are unable to pronounce some sounds and most of those get heavily changed.[5] It is speculated that at same point in history all Orks spoke the same form of the language, the one Imperial scholars call Old High Orkish.[1] Ork language can be learned by humans to some extent, the most famous example being Sebastian Yarrick, who learned it from a captured greenskin.[6]

The Ork language uses a logographic system and is written in the form of glyphic script. Its core consists of glyphs that indicate Clan, Warband, common Ork concepts and elements of Ork names. These are augmented by phonetic runes that can be used to write most Ork words and words from other languages.[2][3] The resulting script is mainly used to indicate ownership, signify tribal affilation, record battle honours and other such tasks. They are not often used to write down history texts or battle manuals. Instead, Orks have a very strong oral tradition with myths and legends passed from Ork to Ork. Only Meks with their jargon write and share useful bits of knowledge.[1]

In addition to common Ork tongues, Ork Mekboys use a more sophisticated and complex jargon of their own. It includes many scientific and technical terms devised to fit their current projects. When Meks arrange together for some large construction project, it is vitally important for them to understand each other when communicating technical ideas. This is especially true when Meks arrange from far-flung places to work together, each only able to understand only his own dialect. The technical tongues of the Mekboys are written in special scripts, that can't be understood by anyone except other Meks. This way information is transfered from one Mek to another.[1]

Main lexeme of Ork language is a root word, represented in written form either by a glyph or a number of phonetic runes. These are common Ork words and name elements. Naturally, there are myriads of them, varying between worlds, clans and different regions of Ork space, but some of them, listed lower, are universally understood and are included in almost any dialect of Ork language. These basic root words represent key concepts, fundamental to the Orkish way of life. As such they are known among all Orks and have probably remained unchanged from the dawn of the Ork race.[1]

These root words are used to create names of units, tribes, individuals, places or battles and to indicate ownership and such. Most of them have multiple meanings, that depends on the context. In fact, Orks don't recognise the strict limitations on the meanings of words and described glyphs may have different meanings not listed here. They often string words together in imaginative compounds to express what they mean, resulting in a very approximate manner. Because of it, Ork language is not known for its clarity as Orks do not demand precision from it and are quite happy to follow the gist of what is being said.[1]

Ork language glyphs can be used in combination to express certain ideas. For example, the folllowing ownership note:

translates to Ork language as:

In written form it is composed of glyphs, like this:

The literal translation of this will look like this:

Orkish names usually consist of two parts: a prefix and a suffix (for example, Grim-Bog or Grimbog). Some Orks have two such names composed in the same manner (for example, Grimbog Nazbad). Orkish personal names, place names and tribal names follow the same pattern. In the end, particularly successful Ork's full name may be as long as Ghazghkull Mag Uruk Thraka.[1]

Orks write numbers by numerical runes shown above. Larger numbers are made up of combinations of these runes. For example, 10 is written with two 5 runes and 100 - with twenty 5 runes. This system is very crude and simple but is good enough for ordinary Orks.[1]