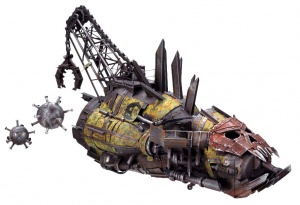 Ork Mekboys create all kinds of strange vehicles and one of the most bizzare is the fifty tons of floating metal known as Ork Minelayer. This craft is suspended in mid air by powerful repulsor fields and uses its powerful engines to propel itself in clouds of black smoke. It is sometimes armed with a Killkannon or multiple Big Shootas and features a cavernous bomb bays.[1]

These usually contain row upon row of specially-built Repulsor Mines, which themselves contain weaker repulsor fields. These mines are placed by Minelayer's claw and after their fields are activated, they float in mid air until someone passes under them. This will collapse delicate repulsor field, causing the fine to fall on top of him. The unlucky trespasser is torn to shreds by a massive explosion, if the fall of a heavy mine doesn't kill him first.[1]

Minelayer's Mine Grabber is also used for light crane work by Ork Mekboys.[1] The craft is sometimes used as a dropship, its bays filled with angry Boyz instead of the mines.[2]