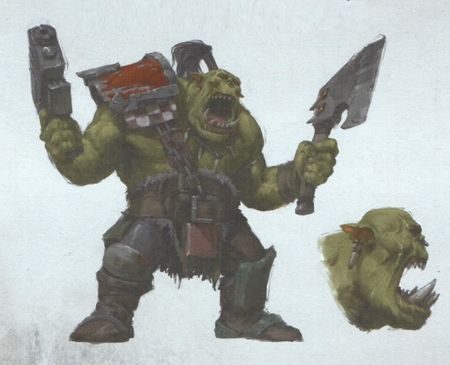 The Ork physiology is simple and robust made to allow Orks to survive the most horrendous injuries and still come back for more.

The term Orkoids constitutes several races or species. Of the Orkoid species the Orks are the dominant race:

Orks are a symbiosis of both animal and fungus at the most basic level. The Orks animal side lives in complete harmony with its fungal side and each compliment the other and come together to form a tough and resilient creature. An example of this is found when comparing an Ork to a human. It appears that the fungus allows the Ork's body to negate the use of complex internal organs, the immune system and the reproductive anatomy. The fungus therefore allows the Ork to reduce the number of potentially fatal injuries possible, further improving their survivability. The Ork's animal side however suggests a primitive pack-based omnivorous growth pattern; the Orks relying on each other to hunt for food etc. in a pack. The most interesting feature however, is the lack of any sign for any evolution or evolutionary process. This indicates that the Orks may have been created, or grown, as a result of highly advanced biological engineering. If this is true, then it is likely that the Orks represent the ultimate fighters; strong, tough, durable and aggressive with the biology to back them up.[1]

The most striking feature about the Orks is their green skin. Combined with their green blood, Magos Biologis have come to the conclusion that, rather than a complete reliance on the consumption of nutrients in the form of food, Orks have a primitive and basic ability to photosynthesise. This would give them a tremendous advantage over other races as they can reduce their supply lines to ammunition and fuel and all the other parts of war, but without the need to transport perishable goods. The blood of an Ork is also interesting, in that it contains countless distinct fungal organisms and has a chlorophyll high content, with trace elements of carbon and copper. This would account for the green colour of the blood and shows that photosynthesis is an important part of the Ork structure.

The Ork head is, like many xenos of the galaxy, similar in design to that of the human cranium, although it is of a different shape and colour. The teeth suggest an omnivorous or opportunistic diet, which links with their primitive pack-based organisation. The skull, like many other parts of the Ork body, is far thicker than that of a human, giving it toughness far exceeding humans' own. The tusks on the Ork face are unlikely to be related to food consumption (even though Orks photosynthesise, they also consume food, mainly Squigs) and are more for decoration or combat, more likely the latter. They have pointed ears like the Eldar, although they have a low density of nerve clusters, indicating a stripped down to bare essentials approach to the Ork creation. All of this gives Orks a simple, effective and durable body, allowing them to fight well but passing over quality of sensation.[1]

An Orks internal organs, noted earlier, are simple and effective, relying heavily on their fungal elements. They have a large multi-chambered stomach which feeds a crude renal system. This combined with a body-cavity filling 'fungal soup' (which has the effect of replacing the biochemical organs (liver, kidney, spleen, pancreas etc.) gives the Orks an intensely strong internal system, even though it is quite basic in design.[1] The bones of an Ork are thick, hard and durable, allowing them to sustain high velocity impacts without fracture or damage. The structure is similar to that of humans but the core of the bone contains a spongy fungal matter, replacing the simple human marrow.[1] The Ork brain is quite large, similar in structure to that of a human or Eldar. There is, unusually, a complete lack of fungus or vegetable matter. The most developed part is that of the old brain, controlling more base functions which explain their natural aggression and pack hunting strategies.[1] Finally, much of the Ork body is filled with a spongy mass, presumably to protect what little internal organs the Ork possesses. There are also several gills located around the Ork body, presumably for oxygen absorption.

The structure and design of the Ork body provide a strong, tough and resilient system but also running at a low level of complexity. These combine to show that Orks are genetically engineered for combat. Their muscles are extremely strong and their squat bodies can stand immense punishment.[1]

Orks have an innate knowledge of how things work. For example, Mekboyz do not learn their trade, the knowledge is built into their fungal code and is slowly released as the Orks grow. This genetic information gives the Orks a tremendous advantage over other races as they can often develop a complex society (or as complex as an Ork can get) without the need to teach anything, giving them combat ready warriors from the moment they are fully grown.

During the War of the Beast, Magos Eldon Urquidex autopsied several Ork corpses on Ardamantua, and noted that the part of the brain responsible for problem-solving, usually located in the frontal lobes of humans and most other sentient species, was found in an earlier-developed and more basal location in the Orks' brain; this indicated that all Orks, despite their apparent savagery, actually have an innate and primal ability to understand and overcome obstacles of any kind.[2]

The effects of Ork 'surgery' on the Ork body

Orks are operated on by the 'Painboyz' of the tribe. They seem to operate on a generally nineteenth century level of surgical knowledge. Unlike humans, though, Orks are quite capable of being beheaded, having the head sewn onto a different body, and surviving the experience to fight again. The Painboyz also tend to use anything that comes to hand to fix/improve/augment the Ork body. Often this includes drilling and screwing things into the Ork and hoping they survive. Unfortunately, the Orks seem to be so tough that almost anything a Painboy does to an Ork is non-fatal, even when it involves large screws sticking out of arms and bones. This is also seen when Orks are 'upgraded' with bionic implants.

Orks grow all through their lives; the effect is most notable in the most successful Orks. As the Ork survives combats and wins trophies, the respect of other Orks will produce in him an effect somewhat similar to adolescence in the human male: puts on muscle, becomes more aggressive and assertive, and generally throws its weight around. If it wins the ensuing challenges of single combat, it may become a Nob, a leader of Orks (similar to a Sergeant), noticeably larger and tougher than average boyz. Once it begins to grow, an Ork will generally keep getting bigger and stronger until he is beaten by a bigger or more cunning Ork. Warbosses and Warlords, the rulers of continents and empires, are very large Orks indeed.[1]

Orks eat fungi of all kinds as well as meat. A particularly favoured ingredient in their diet are Squigs, short for 'squiggly beasts' - a variety of symbiotic races about the size of a cat, but legless. Often the only ones consumed are those known as the 'Eaten Squigs', a limbless blob which feeds on fungus. Their development is often seen as that of pack predators, although it is unlikely that they are hunting Eaten Squigs, limbless as they are and not providing much in the way of a challenge.

Ork behaviour is dominated by the Waaagh!, a gestalt psychic field they generate that has affects on the Ork psyche, as it allows Orks to instinctively recognise who is 'bigga' and therefore who is in charge. All Orks generate this field, and it grows stronger as the Orks enjoy themselves, generally while fighting. The Waaagh! helps give momentum (and the name) to the Orks' planet-crushing Waaagh!s. These Waaagh!s are a cross between a crusade and a pub crawl, with a bit of genocide thrown in for good measure. Thousands of Orks will gather together, drawn to the power of a single dominant Ork called a Warlord, who is bigger and more intelligent than the Orks around him. Then the Orks will set off to find an enemy to fight - any enemy. Ork Waaagh!s will sweep whole planetary systems away and destroy armies and fleets in tides of bloodlust and carnage, and only once the Orks have killed every available enemy will they start to fight amongst themselves again.

The Adeptus Mechanicus has theorised that this gestalt psychic field also has a telekinetic affect, allowing Ork technology to work. This argument has been debunked, even by the Imperium itself. It is believed that the reason this argument came into existence is that the Imperium believes that a 'Machine Spirit' inhabits all technology, and that this machine spirit serves humanity. If this is the case, without a machine spirit Ork machines could not work, requiring some psychic effect to justify their often devastating effect. However, Genetor Lukas Anzion has noted that many Ork-built weapons will not function unless wielded by an Orkoid. It is thought that this is the reason red Ork vehicles go faster: simply because the Orks think they should! But accounts from Imperial Guard units using captured Ork equipment (such as during the First Siege of Perlia) confirm that Orkish technology is merely extremely crude and unreliable.

There are two theories relating to why Orks have such a unique biology. The first is that they were adapted by their masters the Snotlings, a race that soared to intelligence upon eating a particular species of mushroom, spread across the galaxy with the help of their less intelligent Ork slaves, and were then deemed stupid again when the Orks consumed all traces of the mushroom which only grew on their home planet.

The more modern one is that they are the Krork, created as a survivor race by the Old Ones (referred to in Ork legend as the Brain Boyz) in their wars against the Necrontyr. The fact that an entire ecosystem can be constructed of Orkoids, and their total war-readiness, suggests that this is the more likely of the two. In early forms of this theory, the Brain Boyz were an Orkoid subspecies, along with Orks, Squigs, and Gretchin.

Orks have not only survived, they have prospered and are more numerous than humanity. This at least is due in part to how they reproduce. Orks reproduce through the release of spores, which grow into a plant-like womb underground that nourishes the bodies of the various Orkoid species. This is the entire basis of the Orkoid ecosystem, producing first Squigs, then Snotlings who cultivate the Squigs and fungus, then Gretchin to build the settlements, and finally the Orks themselves. This means the Orks, where ever they go, will have an abundance of food, slaves and other resources, a moving ecosystem that supports them as they go on their Waaagh!s[1]

This also makes it extremely difficult to rid a planet of Orks, even if the initial invasion is defeated. Orks release spores throughout their lives, but release them particularly at the moment of death. Without a nearby population of Orks, the fungus will eventually start the Ork life cycle anew. Decades after weathering an Ork Waaagh! settlements on a planet can find themselves faced with an unexpected attack from Feral Ork tribes coming out of the wilderness.[1]