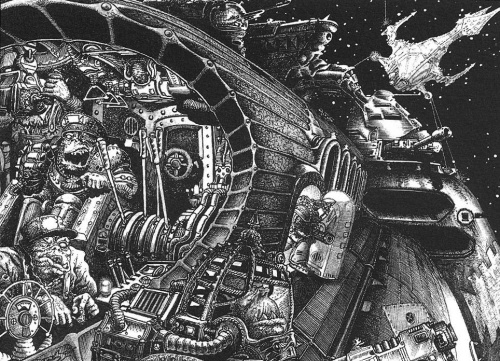 Ork vessels follow the usual tendencies of Ork Technology and vary immensely in the components they are constructed from, being more the result of individual experimentation and patchworks of salvaged parts than of planned starship manufacture. Even the ships built by the same Meks will differ. Ork Spaceships are full of various ramshackle devices, many of which are of unknown purpose. Those that can be identified vary tremendously between different ships and may even be a looted technology of other races. Components are often customised by Ork Mekboys, giving them even more unrecognisable and bizzare appearances. [2]

While no two Ork ships look alike, most of them feature components, essential to Ork space travel. Similar in purpose, if not the appearance, the following components are found on almost all Ork vessels:[2]

Ork ships use ramshackle drives that likely shouldn’t run at all. They are far from reliable and are prone to leaks, flares, and catastrophic accidents. Often, great trails of superheated gas pour from the aft of Ork ships, not entirely dissimilar to the greasy black exhaust fumes of their ground vehicles. These engines are connected to powerful reactors, randomly linked to all manner of conduits and cables that feed into systems all over the ship, trailing along floors and dangling from ceilings, constantly getting broken in one places and fixed in others. It is a rare day that the reactor does not have additional lengths of cabling added to supply some of the ship mekboy’s new experiment.[2]

Ork warp travel is an uncertain and erratic process, and the warp drives that allow it are similarly unstable. Some are rebuilt from the ruins of salvaged Imperial warp drives, while others may be bizarre contraptions built around the disembodied brains of the Ork Weirdboys. Whatever the manner of their construction, Ork warp engines carry a ship into, through, and out of the Warp.[2]

In place of the flickering Geller fields of Imperial starships, Orks use a variety of adornments, totems, huge hull-plate “teef,” and protective glyphs to ward off the malign influence of the Warp. It is unknown if these actually scare off warp creatures as Freebooterz have been known to claim or simply inspire such confidence in their crews that the ships are wreathed in a crackling shield of Waaagh! energy while in the Warp. It is possible that daemons just aren't so fond of Ork souls taste as they are with human ones. They seem to work most of the time, but occasionally daemons are able to pass to Ork ships, providing entertainment to bored crews.[2]

The bridges of Ork ships are dark and dank cavernous chambers, bedecked with supplies, ammunition, piles of loot and machinery of indeterminate purpose. Their only common feature is a giant red button, linked directly to the main drives of the ship, controlling its powerful thursters.[2] 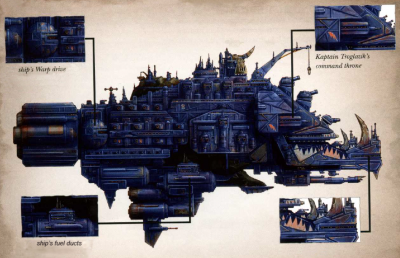 Ork vessels hold large numbers of greenskins of all kinds, serving as much as transport craft as warships. Many of the smaller craft are capable of planetary landing, unleashing a green tide of roaring, belligerent warriors. Even the bulkiest of cruisers regularly attempt to board enemy vessels. These vast crews make Ork vessels fearsome opponents in any boarding action[2]

Carved from the flanks of Ork ships, launch tubes and landing decks sit open to the void but for the crackling force fields that hold the ship’s atmosphere in. They are almost always crammed full of Fighta-Bommers and Assault Boats ready to be unleashed on a fresh prey. The remaining nooks are claimed by the swaggering and insane Flyboys who pilot the attack craft, hordes of Grot Riggers, and Meks constantly building, rebuilding, and “improving” the fighters. As is the case with other races fleets, only larger vessels usually have the space and resources necessary to support whole squadrons of attack craft. The same bays usually contain a number of Landas Orks use for planetary assaults.[2][3]

Orks make massive use of energy field technology. Their ships sport protective energy barriers comparable to Imperial void shields, though an Ork generator is more likely to be covered in crackling electricity, spew clouds of noxious smoke, or randomly vaporize any Orks that stand too close.[2]

The exact nature of Ork life sustainers varies tremendously from ship to ship. Boarding parties and Mechanicus salvage teams have observed everything from clanking pneumatic air pumps to giant squigs of unknown breeds used as bellows. The only thing these devices have in common is none of them should work. However, usual Ork toughness allows them to feel comfortable even in a harsh conditions, supported by these crude devices.[2]

While it would be impossible for the Orks to voyage amongst the stars without some form of long-range detection, the nature of the technologies employed are unknown. As with much of Ork technology, a crude and simplistic appearance belies impossible sophistication. Orks simply refer to their myriad scanners as “searchy grubbinz” and they may take any form from powerful aetheric scanners to gigantic telescopes.[2] 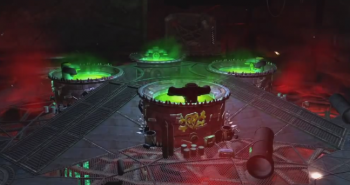 Ork ships not only vary in appearance, but also have different supplemental components. Every new Ork vessel will feature an unusual device, not found on others. While there are many such components, the most common of them are listed here:[2] 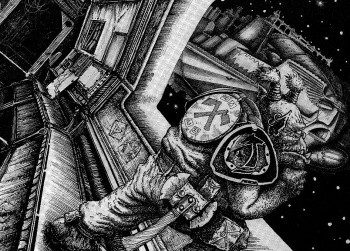 Some devices are so massive or rare they can only be found on Ork capital vessels. These fearsome craft become even more deadly when equipped with these unusual devices:[2]