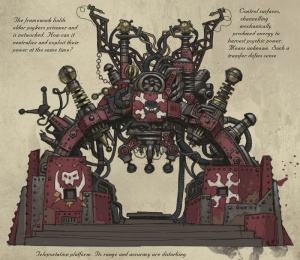 Tellyportas are a form of Ork teleportation technology.[1]

Ork Mekboys have an innate understanding of many types of technology, one of which is teleportation, which they have mastered to a greater extent than races widely believed to be more advanced. The technology is believed to be the creation of the brilliant Mekboy Orkimedes, but given the specifics of Ork scientific process it can't be said that no Ork utilised the technology before. Meks usually struggle to find willing test subjects for teleportation, but in the heat of battle it's never too hard to convince the Boyz to try the Tellyporta if they can close on enemy that bit sooner. The results of Ork Tellyportas may be erratic, but their physique is robust enough to withstand them.[1][2]

These portable devices are usually carried by Meks or Big Meks and usually are able to teleport the user and his squad in the desired position.[4]

These range from smaller devices, able to teleport infantry squads to massive Tellyporta Patforms, able to teleport even Stompas in and around the battlefield. Sometimes even bigger devices are mounted on Roks and, after they landed, could be used to bring down reinforcements quickly, including even pre-built Gargants.[1][2]