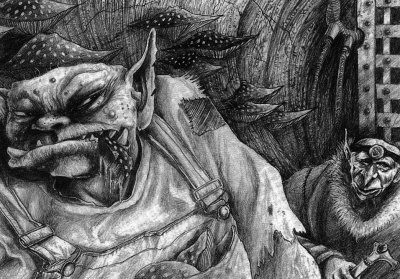 All Orkoid races are symbiotic with species of fungus. In fact, all of them grow from the same spores - depending on conditions the same spore may grow to a mighty Warboss or a harmless fungi. In this way, Orkoids are not just a race, but a whole ecosystem in itself. When Orks invade new worlds, this ecosystem grows. It is widely known that once a world is invaded by Orks, it is never entirely free from them again. Ork spores grow in the wilderness, giving birth to a new forms of Orkoid life. Different forms of Orkoid Fungus play essential roles in Ork society. Ork Settlements are surrounded by great patches of the fungi. Cultivated by Snotlings, they are a primal source of food in Ork society.[1][2]

These round fungi contain huge amounts of poisonous spores, which are released after they are broken or crushed. Snotlings use them as primitive fungus bombs, dropping them under the feet of an enemy. After they step on it, they will have to suffer a nasty whiff of toxic spores. All Orkoids ar immune to these spores, they only make them cough and gag. Puffballs cleaned of spores and stuffed with marinated Squig meat is a popular Ork meal. Spores collected from a different varieties of Puffballs are used to make Fungus Gas Bombs and for various medical uses.[1a]

In appearance the Speckled Bloodshade is a deep red or purple fungus speckled with yellow or green flecks. It can be eaten by Orks and has important medical uses due to to its effect on the Ork bloodstream. This fungus is rich in moulds in spores found in Ork blood and skin, so it can be used to enrich the blood to speed up the Ork metabolism, usually in fungus juice injection cylinders. It is also used to slow the flow of blood - a great benefit in treating wounded Orks.[1b]

Snotlings feed on fungus, often eating as much as they can, which can lead to strange side effects, one of which is becoming fungoid. Snotlings start to become lazy and feckless and eventually vegetate at the side of the drop, running into a Snotroom or Mushling - a fungus preserving the vestige of a snotling face. These are usually eaten only on festive occasions, as they become tough and large.[1c]

This fungus can grow very large and it becomes quite hard to eat a big one in one go, hence its name. Gob-Buster has a tough texture and strong spicy tang - big and old ones are so strong Orks sometimes have to spit them out. Some Orks consider finishing a Gob-Buster a demonstration of self-endurance.[1d][3]

Other known orkoid fungi include: