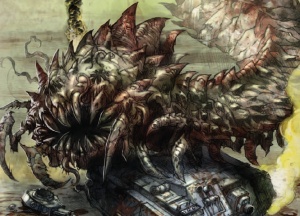 An osedex attacking a Chimera carrier.[1]

Osedex are an indigenous species which can be found on the Death World Zel Secundus in the Calixis Sector. An osedex resembles a centipede in all aspectes but in size: they usually reach a length of 10-20 metres but some exemplars could be bigger.[1]

Measuring 3 metres in length for a hatchling, a typical specimen is nearly three times that length, with a broad, low body that gives little resistance to the powerful winds of Zel Secundus. These creatures are completely blind, detecting prey through clusters of sensitive bristles lining the underbody. Osedexes will readily and relentlessly attack anything they perceive as prey. Once they get their mandibles into their prey, they’ll consume the victim on the spot. What little study has been done, indicate Osedexes grow throughout their lives but the precise lifespan for the creature is not known. A few claim also to have seen gigantic 100–metre long Osedexes.[1]

Offworld, the thick scutes of the Osedex’s heavily armoured segments are prized for their durability and protective qualities. This has led to some attempts to actively hunt immature Osedexes, but considering the dangers inherent in simply venturing abroad on the surface, most people are content with harvesting the remains of Osedex that have died naturally.[1]