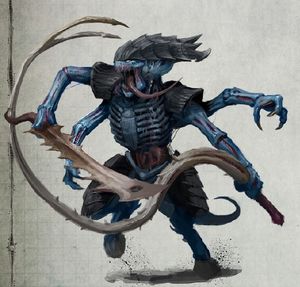 A warrior of Hive Fleet Ouroboros[3a]

Hive Fleet Ouroboros is a Tyranid Hive Fleet believed to have been encountered by the Imperium near the Eye of Terror sometime before M36.[1]

In M36 the then-Cardinal of Thracian Primaris, Miriamulus the Elder, recorded the history of the "Legion of Ouroboris" that attacked the Helican Sector in an earlier age. The legion was described as consisting of winged monsters, vomited from the bellies of great beasts, that descended from the heavens and stripped the countryside of life. The Emperor himself is attributed with leading a crusade that resulted in the monsters turning on their own forces, culminating in a twelve day long battle over a Warp Rift close to the Eye of Terror.[1]

A later analysis of the Warlord Titan Mechanica Cranus, a cited veteran of the Ouroboris Wars, revealed distinctive bio-plasma scarring and pyro-acid burns that match Tyranid bio-weaponry. It is also believed that the Space Wolves have trophies, very similar to Tyranid lifeforms, dating from this epoch, such as the so-called Kraken's Egg. Augur-dating techniques date the Titan's damage as being caused post-Heresy, making the Emperor's supposed presence in the Ouroboris Wars extremely unlikely.[1]

The Imperium's first modern encounter with the Hive Fleet occurred when it consumed a chain of populated worlds bordering the Thracian Sector. With no record of the Hive Fleet, the Imperium designated this new threat as Ouroboris - a name taken from the ancient records given by Miriamulus.[3a] Though it is impossible to prove any connection between the two, the recent encounters with Ouroboris have uncovered disturbing echoes of those old legends. Ouroboris is noted as favouring massed aerial assaults, filling the air with so many Gargoyles and Harpies that those below must fight in near dark. Tales of flocks of winged horrors are certainly consistent with Ouroboris's typical predatory behaviour as it strikes swiftly, honing in upon areas of strategic value with unerring accuracy. Yet perhaps the most disturbing aspect of the hive fleet is its strange, primordial biology. Encounters with Ouroboris have revealed that the organisms spawned by this Hive Fleet contain cruder, primitive versions of common Tyranid bio-weapons and organs. Unfortunately, these strange mutations have rendered many weapons and tactics designed to counter the Tyranid menace largely ineffective against Ouroboris[3b]; with even anti-Tyranid chemicals having no effect.[3a] The Hive's bio-weapons also give off a soft, lambent glow that results in an unsettling haze of witch-light that surrounds its hosts in battle.[3b]

A detachment of the Cadian 14th, known as the ‘Swarm Crushers’ due to their storied exploits during the Second Tyrannic War, was sent to wipe out a tendril of Ouroboris that threatened the desert world of Shukra. Drilled in the most efficient methods of slaying Tyranids, morale was high amongst the Cadians as they engaged the first swarms. Confidence swiftly turned to panic as the Cadians’ tactics had little or no impact upon the xenos. Pinpoint shots that should have ruptured vital organs had almost no effect, while salvoes of airburst shells filled with anti-Tyranid chemicals merely provided cover for the swarm. Stunned by the ineffectiveness of their defence, the Cadians nevertheless sold their lives dearly before they were devoured.[3a]

While en route to Ultramar, a fleet of Sororitas comprising multiple Preceptories of the Bloody Rose stopped in the Thresh System. Their halt was in response to a vision received by Sister Assumpta, who had yet to see combat. The Sisters arrayed themselves for war on the lifeless world, and held their positions for a day while the Canoness of each Preceptory prayed for guidance. Their duty was made clear when a tendril of Hive Fleet Ouroboris spewed into the system. The xenos honed in on the Bloody Rose’s position and descended upon the planet in great waves. Swarms of skittering predators were butchered by the Sisters, squads of Sororitas were devoured by ravenous monstrosities. Knowing that the Tyranids feed off biomass, the warriors of the Bloody Rose ensured that every corpse – human and xenos – was burnt to ashes. After six months, the influx of Tyranids into the system ceased, and after six more the last xenos creature was finally slain. Sister Assumpta was the only member of the Sororitas force to survive.[4]

Codex: Tyranids (4th Edition) states that Hive Fleet Ouroboros may have been thrown into the Galaxy and deposited into the Eye of Terror ahead of the main Tyranid Hive Fleets due to treacherous Warp currents.[1] However, Codex: Tyranids (5th Edition) has since stated that the Tyranids are not capable of using warp travel, as they were in earlier sources.[2]