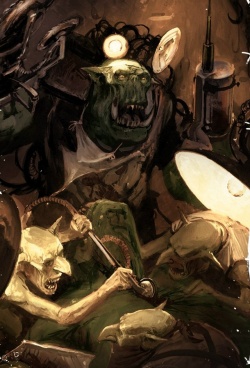 High-ranking Painboyz are called Painbosses and are known to be accompanied by Cybork bodyguards.[1] They specialize in both surgical care and cyber-augmentation of both Ork and Squig. So as to provide their services "on the hoof", Painbosses augment themselves with piston-driven soopa-legz, monowheels, and other bizarre forms of Bionik augmentation.