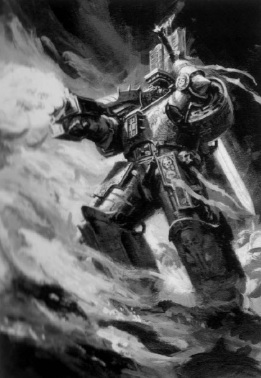 Paladins are the noblest and most elite warriors of the Grey Knights Chapter, who stand watch at the Hall of Champions on Titan.[1a]

These warriors stand as one of two unique brotherhoods within the Grey Knights, the other being the Purifier. Where Purifiers serve as spiritual hearts of the Chapter, the Paladins act as the Grey Knights' martial champions. Typically, their primary role is to serve as bodyguards to the Grand Masters though they are commonly assigned to the Brotherhoods, where they benefit the latter with their skills and experience which can turn the tide in a desperate battle.[1b]

An honoured position, the Grey Knights do not believe that a warrior is forged in battle but rather that battle tempers their fighting spirit to do greater acts in the future. The perilous nature of the quests needed to join their ranks means that only the boldest of Grey Knights ever become Paladins. Despite this being the case, it is unheard of for any aspirant to abandon the quests needed to rise to this rank as to do so would be a grave dishonour. Thus, whilst the cost of becoming a Paladin is high, it ensures that only the noblest of warriors of the Imperium are included within their ranks.[1c]

Membership is only accomplished if the aspirant manages to complete eight quests to establish his character; simple bravery or skill are not enough to prove the aspirant's worth. To begin these trials, the aspirant must spend a day and night in the haunted caverns beneath Mount Anarch without losing their sanity or sense of purpose. If they endure, they must then match their will against the evil within the Abbiallach tome located in the Sanctum Sanctorum. With their mental fortitude tested, they must then prove their strength of arms by taking part in a pilgrimage to Lansel's Tomb on the doomed moon of Tethys. They must do so without their armour to preserve them against the warp-spawned beasts trapped there. Their mission during this time is to kill each of the four types of Daemon Herald in the service of the Chaos Gods and return with some proof of the creature's demise, such as a horn or tooth. The four following quests are each more grueling than the last, the final task being the most difficult of them all. In the final quest, the aspirant must hunt down and banish one of the 666 most powerful Daemons to ever manifest in the material realm. This they must do with only a Nemesis Force Weapon and the creature's true name, taken from the Iron Grimoire. Completion of this task allows the candidate to ascend to the rank of Paladin.[1c]

After the completion of these trials, the newly risen Paladin takes part in a victorious feast at night whereupon they must leave their Brotherhood in order to now reside within the hallowed halls of the Paladins. Their elevation means that they are not only bound in service to the Chapter but to one of the Grand Masters, whom they serve in the role of bodyguard, champion, and advisor. As such, the Paladins will always be located in that part of the battlefield where the fighting is thickest and where the greatest peril resides. In addition, Paladin squads are charged with the protection of any Apothecary that comes to the warzone as their important role means that they deserve the best guardians among the Grey Knights.[1c] Within the Hall of Champions, there exists ranks upon ranks of marble statues bearing the likeness of Paladins that stand alongside other great heroes of the Chapter.[1a]

Paladins are divided up into squadrons, each led by a Paragon (effectively the Paladin equivalent of a Justicar).[4] The Paladin Order as a whole is led by a High Paladin.[3] 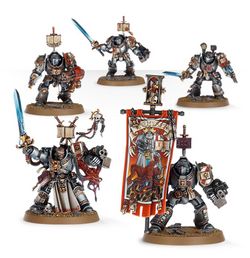