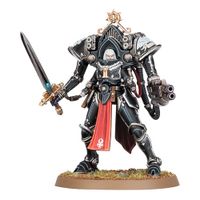 The Paragon Warsuit is an armored walker, used by the Adepta Sororitas.[1]

These vehicles are gifted to elite Celestians[3] who have expressed the ultimate faith. The Machine Spirits bounded within the Warsuits trust only the purest Sisters of Battle and are difficult to tame. However, should such a union be successfully formed, the pilot can advance through the thickest enemy fire and engage the most fearsome of foes.[2] The pilots must possess incredible skill to pilot these vehicles, for they are capable of extremely complex and fluid maneuvers.[4]

Each Paragon Warsuit is equipped with firepower to rival a Space Marine Dreadnought. Their left arm incorporates a Heavy Bolter, Heavy Flamer, or Multi-Melta which is augmented by a shoulder-mounted secondary weapons consisting of either twin Grenade Launchers or Storm Bolters. Its right arm wields a melee weapon consisting of a large Paragon War Blade or Paragon War Mace.[2]