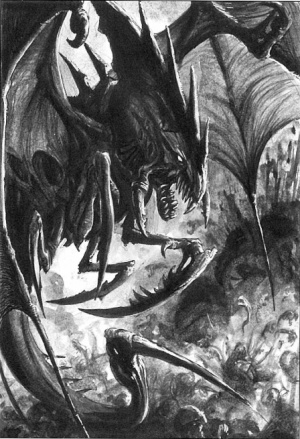 The Parasite of Mortrex is a bat-winged Tyranid creature the size of a Tyranid Warrior that has a barbed tail tipped with a hollow tube, like a snake's fang, capable of implanting its still-living victims with Ripper parasites. Within hours, or even as short as a few heartbeats, the Ripper parasites mature and devour their hosts from the inside out.[1]

The Parasite of Mortrex was first encountered on the Imperial Fortress World of Mortrex in the Ultima Segmentum. The solid Imperial Guard defenses held back the Tyranid invasion for days... until the tenth day when the Parasite first attacked. Each victim it claimed added to a swelling horde of Rippers and soon only armoured units dared to leave the fortress walls. However, even tanks couldn't withstand the massive numbers of Rippers. Two weeks later the planet was completely overrun by vast swarms of Rippers. A single transmission was sent out as the planet fell, warning of the Parasite of Mortrex. Fortunately for the Imperium, it has not been sighted since Mortrex.[1]