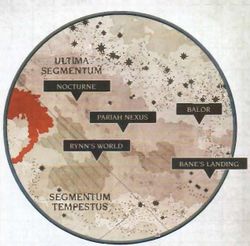 Location of the Pariah Nexus[3]

The Pariah Nexus is a region of the Nephilim Sector within Ultima Segmentum.[2]

Also known as the Zone of Silence, it is a region of space that seems to be free from the influences of the Warp. The Imperium thus named it after the Pariah Gene, which has a similar effect of suppressing the Warp. In truth, the Nexus is a vast Blackstone array constructed by the Necrons, more specifically the Cryptek Szeras and the Nihilakh Dynasty. Considered the pinnacle of Necron cosmic engineering, at the heart of the network is the Xendu System where an immense Blackstone cage has been constructed. Around the System are vast amounts of Necron orbitals and warships to guard over their great work. Further out lay networks of vast Blackstone Pylons, their deployment extending through patterns of non-euclidean fractal crypto-logic incomprehensible to mortal minds. Scattered through nodal and outlier systems, each pylon was a unique colossal structure whose purpose was to sustain and extend a field of anti-empyric energy.[2]

During the Indomitus Crusade, the Imperial Battlegroup Kallides was sent to investigate the Nexus, instigating a war there.[2] Imperials in this region soon found themselves effected by a damaging malaise and energy-sapping field dubbed "The Stilling". It is speculated the stilling originates from the many Pylons in the Nexus.[3] 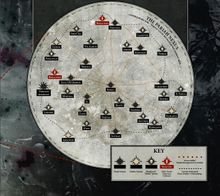