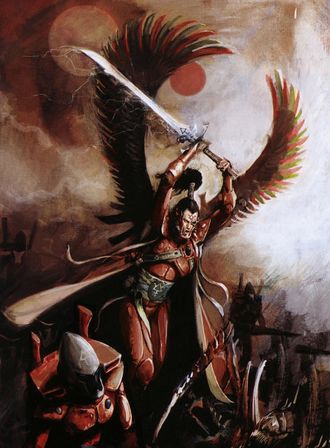 An Autarch, an Eldar who has mastered the Path of the Warrior[8]

Paths are a societal organization of Craftworld Eldar.[7]

After the Fall of the Eldar those Eldar who had managed to save themselves upon the Craftworlds underwent a complete social reform. Their lives would no longer spent in pursuit of their wishes, pleasures, and wanton natures. This had led to the Fall, and the creation of Slaanesh. Instead each individual Eldar chooses for himself a discipline, a Path or 'Ai’elethra and will focus himself upon it. This path will be studied, practiced, and eventually mastered. Then the Eldar chooses a new path and the process will begin anew.[7]

Each new role does not completely replace the previous, but merely adds to the Eldar's accumulated experience. As Eldar pass through these different roles they explore the many aspects of their own character. An Eldar of a thousand years or more will usually have experienced many different roles and attained a very sophisticated understanding of the universe.[2]

All Eldar who tread a path must be cautious, for all of them are dangerous for the Eldar mind. Some Eldar focus and obsess themselves to such an extent upon a path that they become unable to leave it upon completion. They will continue to tread this path until their death. This fate is a terrible one for the Eldar, and such individuals are said to be "lost upon the path". This can be done on purpose. There are an unknown number of paths, and each of them has further specializations.[Needs Citation]

The doomed Bards of Twilight are also lost upon their path but its name is currently unknown.[Needs Citation]

There are many Eldar Paths, or Ai'elethra.[4] The Paths of the Seer and the Warrior are the most well-known, but are just two of the many paths the Eldar may devote themselves to. Some of these other roles are very clearly defined, with their own traditions and behavioral patterns. Others are less structured and offer less guidance. They allow a relative amount of freedom and rely on the inner strength that the Eldar has already attained. These paths involve more civilian and mundane roles such as technicians, civil administrators, fabricators, colonists, traders, explorers, etc. Regardless of their civilian roles, these Eldar still take part in battle as Guardians and in other functions which are necessary in any military force.[2]

Path of the Artisan

The Path of Command, also known as the Path of the Leader[4] is for those Eldar with a passion for military command and strategy. Its members are the Autarchs who tread this path to better command larger forces of Eldar warriors. To enter this path one is expected to have completed previously several 'military' paths already.[Needs Citation]

Path of the Dreamer

The Path of the Dreamer is a meditative path undertaken by many Eldar in which the Eldar learns to control and direct their dreams, which they can stay entranced in for days at a time. During these dreams it is usual for another Eldar to act as a "Dream Watcher".[3b]

The Path of Grief is a path in which one grieves for the death and suffering at Eldar remembrance services and funerals. This allows the other Eldar to remember without succumbing to the emotions that would be in violation of the Path and tempt the wrath of She Who Thirsts.[3b]

Path of the Mariner

The Path of the Mariner, also known as the Path of the Steersman, crew the Eldar Space Fleet. Those who seek this path often wish to see the sights of the galaxy and often seek inner peace after a period in which they feel lost.[3b]

Path of the Outcast

Sometimes young, inexperienced or disgraced Eldar leave their craftworlds to wander among the stars. Thereby they break out of the cycle of paths and go through a period of great danger. This period is sometimes called the Path of the Outcast, Path of Wandering, or Path of Damnation, but these names are technically wrong as these Eldar are completely outside of the cycle of paths.[Needs Citation]

Most of the time they become Rangers. Some eventually return to their Craftworlds and to the safety of the paths. Those who are unable to return, for one reason or another, eventually become Pathfinders. Other outcasts become pirates, raiders, and corsairs.[Needs Citation] Outcasts have even been known to have become mercenaries, fighting alongside other alien races, and even for the Forces of Chaos.[9]

The Path of Service is a path in which Eldar give themselves over to the service of others. Eldar do this out of the same sense of duty that inspires some to take more militant paths. They perform jobs the humans may describe as menial.[3b]

Path of the Seer

The Path of the Seer, also known as the Path of the Witch, is the longest, most treacherous, most complex, and rarest of all paths. Its members are the psychic Seers. The Spiritseers are specialists in the handling of spirit stones for the raising of the Wraithguards and Wraithlords. The Warlocks previously underwent the Path of the Warrior and now lead the Eldar into battle. The Farseers are lost upon the path of the Seer, and are the most powerful Eldar psykers of all. Bonesingers are Seers who use their psychic talents to manipulate the growth of Wraithbone.[2]

The ultimate fate of a Farseer is to become wholly part of the Craftworld as a Crystal Seer.

Path of the Warrior

The ancient symbol of the Path of the Warrior

The Path of the Warrior's members are the Aspect Warriors. Those who lose themselves upon this path become Exarchs. The most widely known aspects are the Dire Avengers, the Howling Banshees, the Striking Scorpions, the Fire Dragons, the Swooping Hawks, the Dark Reapers, the Crimson Hunters, and the Warp Spiders. There are several lesser known types of aspect warriors, some even unique to a single craftworld.[Needs Citation]

Rarer aspects include the Shining Spears, the Shadow Spectres, and the Eagle Pilots, who are the Eldar equivalent to fighter pilots.[1]

It must be mentioned that Guardians are not treading this path at all. They are following other 'civilian' paths, being summoned to fight for the Craftworld for the duration of the given emergency.[Needs Citation]

Some paths must exist, despite their name not being known, because of known Craftworld Eldar that can't be on any of the known paths. By definition, these "known unknown" Paths can only be listed by what is known about their followers.