Path of the Warrior (Novel)

The ancient eldar are a mysterious race, each devoting their life to a chosen path which will guide their actions and decide their fate. When the artist Korlandril feels the call to war, he abandons peace for the Path of the Warrior. He becomes a Striking Scorpion, a deadly fighter skilled in the art of close-quarters combat. But battle is coming, as Craftworld Alaitoc comes to blows with the vengeful Imperium of Mankind, and the further Korlandril travels down the warrior's path, the closer he gets to losing his identity and becoming an avatar of war. Can he retain his sense of self and still be the weapon Alaitoc needs, or will he be consumed by one of the warrior-spirits of his race?

Korlandril is an Eldar from the Craftworld of Alaitoc . He is a sculptor of some renown on the craftworld however, when his best friend Aradryan returns from a long time in space, his life takes a turn for the worse. Spurred by momentary hatred, feeling that he is emotionally betrayed by Thirianna, a female friend, Korlandril is attracted by the Aspect Temples. In order to deal with his turbulent emotions, he finds release in the expression of his anger in battle. Following the path of the Striking Scorpion, the shadow-bound hunter, Korlandril works to control his depthless rage and to focus it on a constructive task.

Trained in the hidden art by Kenainath, Exarch of the Shrine, Korlandril leaves the Path of the Sculptor behind, reining in his primitive bloodlust, crafting his body into a thing of lethal beauty. Korlandril`s first task is against the Orks upon Eileniliesh, an Eldar Exodite world. The Aspect Warriors strike a hammer-blow against the Orks, though Korlandril is gravely injured by an Ork Warboss.

Escorted back to Alaitoc, Korlandril is healed upon the Craftworld, though to a heated mental battle that threatens his control over his War-mask; the ability of a warrior to differentiate between how one must act in times of peace as well as war. When trained by Kenainath, he is taught that the "War-Mask" must be allowed to only surface once blood is shed. Korlandril, however fails to maintain this important division between the rage and excitement of war and the peaceful nature taught by the Aspect; losing the identity he has wrought from his previous Paths and becoming obsessed with his path, becoming an Exarch.

Abandoned by the Shrine of the Deadly Shadow itself, Korlandril, spurred by a message given to him by the Autarch of Alaitoc, heads towards a long abandoned Shrine of the Striking Scorpion, only to be bereft of his own body, as his soul is consumed by a far more ancient Eldar presence, manifesting, alongside its former personalities, as Morlaniath, one of the founding Exarch`s of the Aspect. Korlandril is encompassed by Morlaniath, revealing how the Exarch`s Keninaith and Aranarha are but conglomerations of many Eldar throughout the history of the Craftworld forged into one archaic suit of armour.

War stirs with the arrival of the Phoenix Lord ; Baharroth, Maugan Ra and Karandras to Alaitoc. The Young King is scarified to awaken the Avatar of Khaine, the Aspect Temples unite, and Alaitoc readies for battle. The Imperium launches a frontal assault against the Craftworld with thousands of Guardsmen of the Astra Militarum charging orbital defenses, the main offensive spearheaded by the the Adeptus Astartes. As the battle rages on, Karandras sacrifices himself to save Bechareth a former Dark Eldar Incubi, now pursuing the Path of the Warrior as a Striking Scorpion. Morlaniath then allows himself to be consumed by the Phoenix Lord's armour and becomes the new host of Karandras. Karandras then proceeds to fight against the invading Imperial forces. 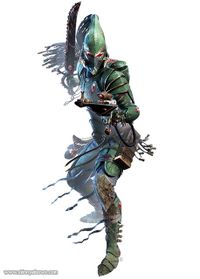