"We have been wounded sorely. Yet still we stand, with fire in our eyes and valour in our hearts. Let them think us beaten. We shall teach them otherwise."[4a] 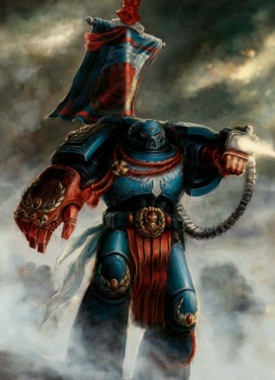 Pedro Kantor (or Cantor), Lord Hellblade,[6a] is the current Chapter Master of the Crimson Fists, and one of the survivors of the Invasion of Rynn's World in 989.M41.[1]

Pedro Kantor is first mentioned during the Battle of Melchitt Sound, when he was a Sergeant. Leading a boarding party, Kantor disabled Da Growla, an Ork Kill Kroozer. With the vessel disabled, a Crimson Fists Strike Cruiser, The Crusader, was able to scatter the fleet.[4b]

Kantor would continue to rise in rank over the next 200 years, often side by side with the legendary Captain Cortez. They both participated in campaigns such as Steel Cross, the defense of Fortress Maladon and the Kardian Campaign.[Needs Citation]

He was promoted to Chapter Master in 900.M41 and was one of the few surviving Crimson Fists when the Arx Tyrannus was destroyed during the Ork invasion of Rynn's World in 989.M41. Kantor was on the outskirts of the monastery doing routine inspection, and he quickly gathered up the survivors and marched to New Rynn City, a trek that took ten days. Here they linked up with the other Crimson Fists survivors and the PDF, and managed to defeat the main Ork force.[4b]

The decision to conserve one's forces rather than strike at an opponent with all the might one can muster is a difficult one for a proud Space Marine. A bold military operation would probably have destroyed any hopes of rebuilding the chapter, so Kantor had to use his forces in smaller operations where the elite Space Marines could inflict maximum damage for a minimal loss of manpower. Even after winning the war, Kantor had to do his utmost to keep the High Lords of Terra from disbanding the chapter due to the extensive losses.[Needs Citation]

Kantor is still Chapter Master and the Crimson Fists are almost at half their original strength as of 999.M41.[2] He later appeared as one of the primary Imperial commanders during the War of Beasts, leading the defense of the Dirkden Fortwall.[3]

Pedro Kantor's weapons include a power fist and Dorn's Arrow, an ancient and venerated storm bolter named after Rogal Dorn, the Primarch of the Imperial Fists (of the same gene-seed line as the Crimson Fists). It is loaded via a back-mounted powered drum feed commonly seen on vehicles, carrying approx. 800 Kraken Pattern Penetrator Rounds. This allows for a faster rate of fire at double that of a standard Storm bolter with marginally improved armor penetration.[Needs Citation]