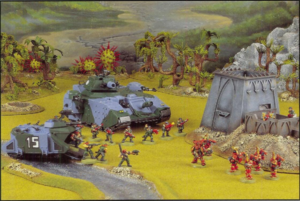 The Pegasus Amphibious Assault Vehicle is an imperial armored transport based upon the Chimera.

The Pegasus AAV is a converted Chimera variant designed by the Adeptus Mechanicus during the battle of Death Bridge on request of General Strong, in order to quickly cross the mile-long river under the bridge and flank the Chaos forces holding the other end. The newly-created vehicle proved very effective in its role, ultimately winning the battle, and General Stong ingenuity's still being talked of in all the Baine regiments.

The Pegasus saw widespread use afterwards, and is often found in Imperial Guard support divisions to this day.

The Pegasus uses a layout similar to the Chimera's, up to the turret and lasgun array, with a few exceptions: The vehicle possesses two access ramps for faster unloading, one at each end, at the cost of hull-mounted weaponry. The vehicle has been equipped with floats on its sides and the armor has been reduced in order to further improve floatability, making the Pegasus more vulnerable but also faster and cheaper that the Chimera.[1]

The Pegasus AAV has no relation whatsoever with the wheeled Pegasus Reconnaissance and Pegasus Command vehicles, that were called Centaur at the time and later had their names changed to avoid confusion with the Centaur artillery tractor.