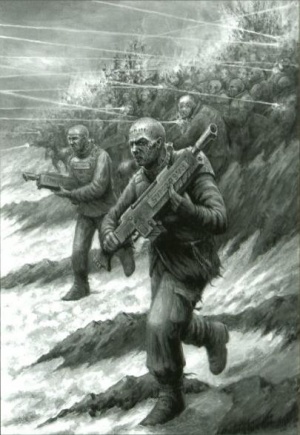 A Penal Legion in action

Crimes resulting in sentence to a Penal Legion can range from failure to return library books, to murder, minor heresy, cowardice in battle, desertion, etc. By serving in the Penal Legions these individuals are given the chance of redeeming themselves in the eyes of the Emperor.[1]

The Penal Legions are not armies in their own rights, but are attached to other regiments and armies in battle, and are useful where greater numbers are necessary to win the day. They are considered expendable, as death is the point of serving in a Penal Legion. They are often used to test enemy defences. New troops have their heads shaved and tattooed with unit insignia, and explosive slave-collars are put around their necks. The collars are a disciplinary device rather than a means of turning the troops into human bombs; the blast is directed inwards, killing only the wearer. The collars are controlled by personnel accompanying the force, and are detonated only to restore discipline. As well as the collars, Penal troops are sometimes equipped with frenzon dispensers.[1][2] 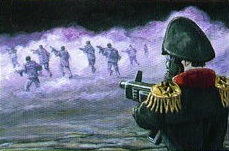 Troops sentenced to the Penal Legions serve for life. Most die in their very first battle, herded into the enemy gunfire and dying by the hundreds. A few, the born killers, somehow beat these merciless odds and survive through numerous battles. In extremely rare cases a penitent might be granted the Emperor's forgiveness in a way other than dying in battle, by performing some incredible act of battlefield valour. These redeemed men then enter the Imperial Guard as regular Guardsmen.[3]

Penal Legion units are formed from convicts, generally from those shipped to one of the Imperium's Penal Worlds, whose populations consist of criminals from throughout the Imperium.[Needs Citation]

Because there are many capital crimes in the Imperium, convicted criminals serve as an inexhaustible supply of recruits for the Penal Legions. For 'petty' crimes that do not warrant immediate execution, miscreants in the Imperium are sometimes shipped to a nearby Penal World. From there some may be formed into Penal Legion units.[Needs Citation]

As mutation is a crime in the Imperium, dangerous mutants such as beastman, "genetic anarchists" and "mutogene carriers" can also be found among the Penal Legions[3].

The Hardened Veterans of the Savlar Chem Dogs Penal Legions are instead known as "Hardened Criminals".[8]