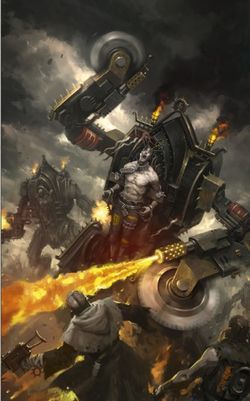 Penitent Engines are horrific machines utilized by armies of the Ecclesiarchy. They frequently are deployed alongside the armies of the Adepta Sororitas, who consider it their sacred duty to witness these machines in combat.[4]

Piloted by heretics guilty of a terrible crime, they have been given one of the worst imaginable punishments available to the Imperium. A multitude of wires and chemical injectors are implanted into the heretics spine, which are then attached to a mechanical suit of destruction. When not engaged in combat, their chemical implants inject feelings of guilt and pain directly into their brains, reminding them of their sins. Driven by their pilot's frantic need for forgiveness, Penitent Engines charge towards enemy forces heedless for danger, knowing that only in death can forgiveness can be earned.

Those condemned to pilot a Penitent engines are often individuals who were once seen as pious by the Ecclesiarchy, such as Priests or Battle Sisters. As a result, the Sisters of Battle consider it a sacred duty to witness these great machines in combat, observing the actions of their fallen brethren as they atone for their sins.[1]

The Penitent Engine is armed with twin Heavy Flamers and Chainfists, one of each on both arms. Penitent Engines piloted by Sisters Repentia modified to wield heavier firepower are known as Mortifiers[3]