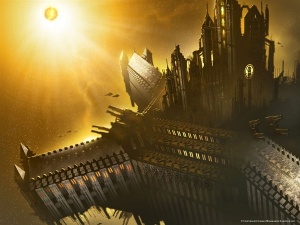 The Phalanx in deep space.[6] 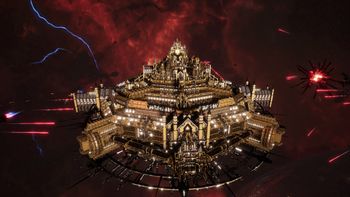 The origins of Phalanx are contested in the background material, of which there are two accounts:

For much of the Horus Heresy, the Phalanx was stationed over Terra and used as the command base of Dorn. However as Horus' advance to Terra drew near, Dorn eventually moved to the Bhab Bastion of the Imperial Palace. During the final stages of the Solar War, Dorn intended to use the Phalanx to shatter the traitor armada emerging on Luna and Mars and personally took command of the vessel. However the Remembrancer Mersadie Oliton unwittingly unleashed the Daemon Samus upon the vessel. Samus and his Daemonic hordes were on the verge of capturing the Phalanx and Dorn was about to order its self-destruction until Oliton committed suicide, banishing the Daemons through the same portal from which they had come. The Phalanx was damaged during the battle, and with traitor forces closing in around them Dorn ordered Imperial Army Admiral Niora Su-Kassen to take the Phalanx into the outer reaches of the Sol System in order to both save it and wage war on the traitor rear lines.[11] During the Siege of Terra the Phalanx formed a Loyalist refugee fleet under Su-Kassen hiding at the edge of the Sol System along with other vessels such as the Imperator Somnium, Red Tear, and Monarch of Fire.[14]

By M32, the Phalanx was already in a state of decay. Built to sustain a Legion, it was far too large to be garrisoned by a mere Chapter of Space Marines. Most of its vast docking bays were deserted, and the Imperium's inability to replicate its ancient technologies resulted in even minor damage creating significant operational troubles. Thus, during the War of the Beast, the Phalanx was moved to the area of space between Terra and Venus so as to not risk it against the Ork Attack Moons.[8]

As of 999.M41, the 3rd Company is defending Phalanx from a Daemonic boarding action led by Iron Warriors Warsmith Shon'tu and the Daemon Be'lakor. Shon'tu and Be'lakor are seeking to outdo Abaddon's 13th Black Crusade by infesting the massive starship while on station in the Sol System and using it to bombard the Imperial Palace. Captain Tor Garadon is commanding 3rd Company's defense of Phalanx. His forces have inflicted extreme casualties on the attackers and maneuvered Phalanx into the warp in order to protect Holy Terra should they fail in repelling the assault. The Legion of the Damned have arrived to assist Garadon's forces as the battle grows desperate. The Iron Warriors used Daemonic computer viruses to take control of much of the station, forcing Tor Garadon to turn the Phalanx's guns on itself to cleanse the infected sections. Ultimately, Be'lakor was able to summon a Warp Rift into the Phalanx but as victory seemed certain for Chaos the Legion of the Damned arrived to turn the tide. However some 10% of the Phalanx was destroyed in the battle.[9]

The Phalanx later appeared during the Thirteenth Black Crusade over Cadia, destroying the Blackstone Fortress Will of Eternity after its shields were disabled by Space Wolves under Sven Bloodhowl. When Cadia was destroyed, the Phalanx led the Imperial evacuation fleet out of the system.[9] The vessel now stands vigil over Terra on the orders of the reborn Roboute Guilliman.[10]

By the time of the Indomitus Crusade, the Phalanx was badly damaged and long-decayed. In an act of solidarity, the Shadowkeepers of the Adeptus Custodes opened one of their Dark Cells and provided the Fists with secret technology, giving the sons of Dorn a chance to restore the station. The vessel now operates on a level not seen in countless years.[12a]

Phalanx is gigantic, the size of a small moon and is said to shine like a star. During the Great Crusade, the awesome magnitude of the ship served as a symbol of the coming era of the Imperium. [1] The capabilities of Phalanx are substantial. Entire portions of the vessel are used to emulate different combat environments for training purposes.[2] Her foredeck is so large that it can dock a dozen large cruisers[1] and has developed its own ecosystem, complete with unique species of animal life that have had their own evolutionary history aboard the ship.[3a]

The interior of Phalanx incorporates stone corridors, archways, and cathedral elements. As of the very beginning of the Horus Heresy, the starship featured a gallery that displayed the battle honors of the Imperial Fists, which stretched for kilometers.[3a] Of course, the ship continues to house Chapter honors and relics. Among the most prized are the Remains of Rogal Dorn and the battle honor Roma. The station itself is defended by the Auric Auxilia.[12b]

There are various descriptions on the general shape and exterior character of the ship. These include a structure of "towering forests of spires interlaced with flying buttresses"[1], A structure that leads observers to believe Phalanx "might have been a planetoid or minor moon".[3a] It is also described as a ship that is "many kilometers long, triangular in cross-section with its upper surface bristling with weapons and sensorium domes. Two wings swept back from the hull, trailing directional vanes like long gilded feathers. Every surface was clad in solid armour plating and every angle was covered by more torpedo tubes and lance batteries than any Imperial battleship could muster" and with "thousands of battle-honours and campaign markings all over the beak-like prow."[4]

The massive foredeck was able to accept large transport ships, including the High Lords' ship Potus Terrae, the equivalent of a light cruiser. The dock itself had a massive atrium covered in ornate panels and had four large, decorated docking corridors that allowed entrance into the ship. The concourse was huge, over 100 meters high with a domed ceiling decorated with Legionary and Chapter victories. A 30 meter wide diamond sat at the top of the dome, the walls held beautiful reliefs, and the marble floor was further decorated with a mosaic of Imperial Fist imagery. At the other end was a massive staircase leading to a kilometers long hall containing various trophies of conquest.[8]

Adjacent to the trophy hall was another corridor with a grand but smaller stairway and corridor that contained damage from fighting during the War of the Beast. At one end of the smaller corridor was a hall for dining and a chamber surrounded with plain glass for meetings. The chamber held a black, circular table and a finely crafted statue of a Space Marine in the center of the room.[8]