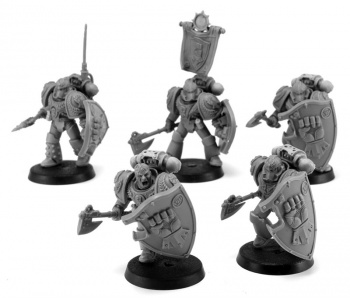 Selected from the ranks of the Imperial Fists Breacher Squads, the Phalanx Warders were a reinforced company assigned to the defense of the Imperial Fists warship Phalanx. Armed with a variety of close range weaponry and guarded by a formidable Boarding Shield, they formed great phalanx walls of ceramite against enemy boarders. They were renowned for their particularly stark training regime, eschewing any duty save training, the protection of the Phalanx, or the prosecution of war on the enemies of Mankind.[1]

Warder detachments were often seconded to other companies of the Imperial Fists, honing their skills and lending their might to that of their brothers on battlefields across the Galaxy. Most often they serve on Imperial Fists warships.[1]